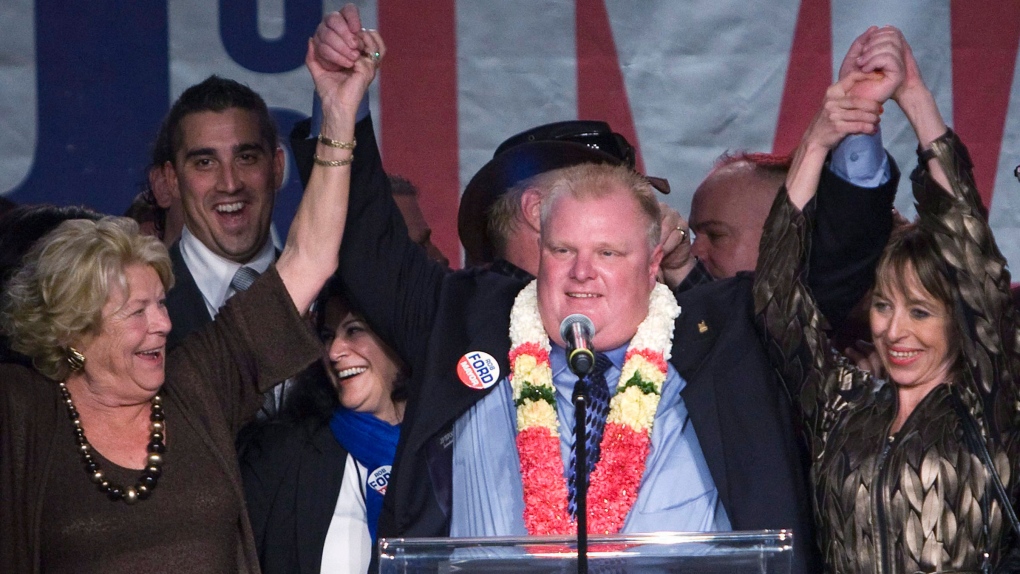 Toronto Mayor-elect Rob Ford, centre, raises his arms with his wife Renata, right, and mother Diane, left, as he speaks to supporters in Toronto on Monday, Oct. 25, 2010. (Nathan Denette / THE CANADIAN PRESS)

Rob Ford, a 10-year city council veteran, rolled over his competition Monday night and will be Toronto's next mayor. Voters responded to his promise to stop "the gravy train at city hall."

After a bitter 10-month campaign during which his popularity surged, Ford was gracious in his victory.

"Four years from tonight, you'll look back and say, 'Rob Ford did exactly what he said he would do,'" Rob Ford told thousands of supporters at his victory party Monday evening.

Ford acknowledged the hard-fought efforts of his main competitors -- former deputy premier George Smitherman and Deputy Mayor Joe Pantalone. He told their supporters: "If you didn't vote for me, I'll work harder to earn your trust."

Ford said his priorities will be customer service, eliminating the $60 car registration fee, and cutting the waste at City Hall.

"We will abolish the fair-wage clause and open contracts to fair and honest competition. ... The party with taxpayers' money is over, ladies and gentlemen."

The CTV News decision desk declared Ford the victor just eight minutes after the polls closed at 8 p.m. Monday following a gruelling campaign that began on Jan. 4, with Ford entering in late March.

"The party with taxpayers' money is over," Ford told his supporters. "We will respect the taxpayers again. And yes, ladies and genetlemen: we will stop the gravy train once and for all."

"We're going to get this city back on its financial feet," he added. "Toronto is now open for business."

With about 99 per cent of polls reporting shapped up with:

Smitherman told his supporters at the Guvernment nightclub complex that he had phoned mayor-elect Ford and offered his congratulations.

When some boos broke out, Smitherman shut down the negative response. "No, there are no boos tonight. We love our city. Toronto is too important," he said.

"It is incumbent on the new mayor to rise above division and seek to unite Toronto, to become a mayor for all Torontonians," he added.

Pantalone, who represented Trinity-Spadina (Ward 19) for about 30 years on city council, is now shut out of city politics.

"I feel fine, because the people have spoken and democracy is beautiful," Pantalone told CP24 before going into an election-night party for his supporters.

Those who "voted out of fear could have a hard time looking at themselves in the morning," he said.

Pantalone continues on in his city council job until Nov. 30.

Ford and the new 44-member council will be sworn in on Dec. 1. The first council meeting will take place on Dec. 7, with 15 new councillors taking seats after this hard-fought election.

The intense campaign resulted in relatively high voter turnout, at approximately 50 per cent. Voter turnout was less than 40 per cent in 2003 and 2006.