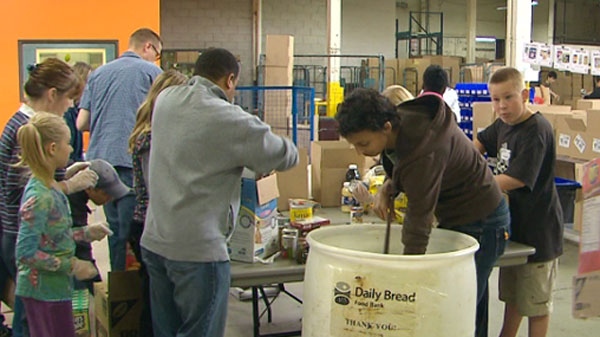 Volunteers help sort food at the Daily Bread food bank warehouse on Thanksgiving weekend, 2010. The food bank didn't reach its goal of 500,000 pounds of food and $500,000.

Whoever becomes Toronto's mayor on Monday will be the leader of a city whose economic recovery has been far from even and has left many behind, says a leading economist.

Alexander added: "When I think about the local elections that are about to happen, a lot of the issues we raise in our report are going to be some of the biggest challenges the new incumbents have."

The Toronto region's economy contracted by 3.9 per cent during the 2008-09 recession.

Since then, the recovery has been robust in terms of the big numbers.

"The rate of growth in the Toronto economy is likely to be five per cent. The national economy is only three per cent," Alexander said.

"That's a lot of people who don't have jobs," he said.

While job numbers have recovered, Alexander said when one digs deeper, the picture darkens.

"On a net basis, 100 per cent of the jobs lost were full-time," but about one-third of jobs created in the recovery were part-time, he said.

"If you're a full-time worker who lost your job, and you can only find a part-time job to replace it, that's a problem."

Social assistance demands have doubled for the city of Toronto. That puts enormous pressure on the government and non-profit agencies trying to help those in need, Alexander said.

However, the election hasn't really turned on the issues of job creation or helping people in need. The debate has mainly centred on cutting the cost of civic government, noted Ryerson University political science professor Myer Siemiatycki.

"We have had a very inadequate debate of issues affecting Torontonians during this election," he said.

There are many indicators of increased social polarization and duress in the city, but "you wouldn't know from 10 months of campaigning that social polarization, poverty and housing precariousness is a problem in Toronto," he said.

"I think it's another indicator the election really got sidetracked on an issue of spending and cost-cutting."

Since budget-cutting will affect service delivery, it may affect those in the most distress, which will increase social polarization, Siemiatycki said.

Coun. Rob Ford, the frontrunner, has campaigned relentlessly on the message of stopping "the gravy train at City Hall."

He does not have a section in the issues section of his website that would address how he might address job creation and poverty reduction.

Former deputy premier George Smitherman -- who is in a head-to-head battle with Ford -- does have a jobs section, with proposals that include a green energy district in the city and $10 million in incentives for businesses to hire youth.

Deputy Mayor Joe Pantalone has tabled a housing and poverty plan. He also has a "good green jobs" plan, but it doesn't give an estimate of how many jobs would be created or how quickly.

In a Nanos Research poll conducted for CTV News, CP24 and the Globe and Mail and released last weekend, support for the three main candidates broke down as follows (mid-September poll results in brackets):

In the October poll, the top issues identified in an open-ended question were:

Alexander suggested he wasn't really aware of some of the troubling problems hanging over Toronto's economy until he started digging into the issue.

Pollster Nik Nanos said based on his work, voters think there is something wrong with Toronto. Part of that could be related to the hollowing-out of the economy.

"I think Rob Ford has been able to tap into a general feeling that something is wrong and it needs to be fixed," he said. "The problem is that people don't actually know what needs to be done to fix it."

Nanos said Smitherman hasn't been successful as a change agent. "The reality is … people are likely voting for Smitherman because he's not Ford," he said.

While Smitherman started by talking about jobs when he first suggested in the fall of 2009 that he would be running for mayor, Ford has successfully controlled the debate since entering the race in March.

"And that's because politically, (cost-cutting is) a much more compelling narrative than talking about prosperity -- which is just a little soft," Nanos said.

"Politically, it's easier to motivate people on negative issues related to City Hall."

But whatever motivates people to vote, the forces causing the restructuring of Toronto's economy aren't going to go away, Richard Florida, director of the Martin Prosperity Institute at the University of Toronto’s Rotman School of Management, wrote in a Friday Globe and Mail commentary.

"Regardless of what happens on election day, Torontonians must face up to the fact there’s no longer one Toronto. That’s the central challenge the city will be facing long after the election is past."