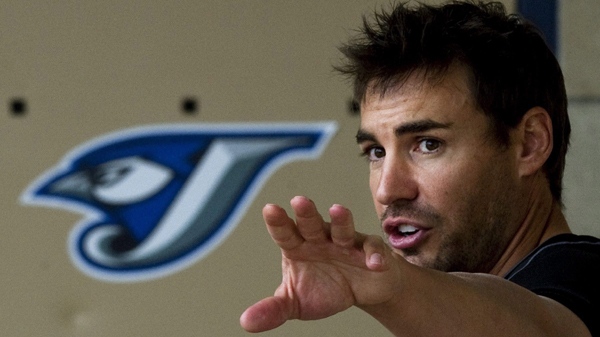 DUNEDIN, Fla. - Scott Podsednik's spring is not off to an ideal start, far from it, but at least he can take some solace in knowing that other years have also started poorly and turned out fine.

"It's a crazy game," he said Wednesday after checking into camp with the Toronto Blue Jays. "A couple of years ago I was sitting on my couch at the start of the '09 season, so anything can happen.

"I've learned over the years to just kind of focus on the things you can control, and all I can control is trying to get myself ready and playing my game in between the lines. Anything outside of that is not up to my decision, so I'm going to try to focus all my energy on things I can control."

A sound approach and, given the circumstances, a wise one for the speed demon and former all-star.

Podsednik arrived in camp on a minor-league contract signed last week, the best deal for him after an off-season that didn't play out anything like what he expected.

In November, he declined his end of a US$2-million mutual contract option for 2011 with the Los Angeles Dodgers and opted for free agency. It backfired since "for whatever reason my market just didn't develop," said Podsednik.

Now, the opportunity at hand is for him to try and win a bench spot, a far cry from the leadoff hitter's role he was seeking. Another wrench was thrown into his plans when a case of plantar fasciitis -- a painful irritation and swelling of the thick tissue on the bottom of the foot -- flared up over the weekend and delayed his arrival in Dunedin.

He received a cortisone injection Saturday and hopes it is as effective as the one he got when the problem last flared up in September. He wants to be cautious in the coming days to avoid aggravating things.

"The docs told me this weekend anywhere from a week-and-a-half to a couple of weeks I should be back out running," said Podsednik, wearing sneakers instead of the large protective boot sitting in his locker. "From there, it's just a matter of getting my legs back under me, getting some strength back. ...

"I've been kind of racking my brain trying to figure out how this happened so I can prevent it in the future, but I don't think we'll ever understand exactly why it happened. We can just try to improve it and get back."

The delayed start may affect his chances of winning one of the bench spots up for grabs with the team, even though he described the Blue Jays as being "the most aggressive in terms of trying to acquire me."

Podsednik fits in with the club's desire to add speed to the roster and with a season of 70 stolen bases under his belt, he certainly does that.

But the Blue Jays will already feature Rajai Davis, a burner who is slated to play centre field and bat leadoff, while Corey Patterson is another speedy outfielder on a minor-league contract fighting for a bench spot. Prospect Darin Mastroianni is cut from a similar mould too, but he has never played above double-A and is slated to open the season at triple-A.

Podsednik offers more at the plate than does Patterson, although he doesn't offer up the same level of defence. Manager John Farrell hinted last week that the club could carry both on the roster.

"We're of the thought that he's still going to be competing for a spot on opening day," Farrell said Wednesday. "We haven't written that off by any means at this point. ...

"First and foremost we need to see him healthy."

The adversity will be nothing new to Podsednik, who burst on to the scene in 2003 as a rookie with the Milwaukee Brewers by stealing 43 bases, scoring 100 runs and posting a .379 on-base percentage.

His OBP dipped to .313 the next year even though he stole 70 bases, but he bounced back with a strong 2005 after being traded to the Chicago White Sox, earning all-star honours en route to a World Series championship.

Podsednik's numbers dipped slightly in 2006 and then he struggled through injuries in 2007 (sports hernia, strained right adductor and strained left ribcage muscle) and with Colorado in 2008 (fractured left little finger).

He posted a .342 OBP with 35 stolen bases and 63 runs in 134 games split between Kansas City and the Dodgers, leaving him confident that he still has plenty to offer even though free agency didn't treat him well.

"I was a bit surprised at the lack of interest," said Podsednik. "That's behind us, I'm a Toronto Blue Jay now and looking forward to make the best of this opportunity."

His irksome foot leaves uncertain how much time he'll get to prove his worth.

It's possible the Blue Jays may ask him to continue working into game shape in the minors if his inactivity lingers, something he didn't want to contemplate.

"I've kind of set my goals to get this thing ready and to get back on the field and show these guys what I can do," he said. "I haven't really thought about it to be honest with you.

"I'm prepared to go and play to keep my game sharp, wherever that may be, considering the circumstances, but you never know how spring training goes for this club, for any other club. There could potentially be other spots open if I wasn't to make this club, a lot of things are going to happen between now and the end of March."

Notes: The Blue Jays will play the first of two intrasquad games Thursday. Ricky Romero will start for one team, while pitching prospect Zach Stewart starts for the other. On Friday, the starters are Brandon Morrow and Brad Mills. ... The exhibition schedule opens Saturday with Brett Cecil starting against the visiting Detroit Tigers. Marc Rzepczynski starts Sunday followed by Kyle Drabek on Monday. ... The Blue Jays had four players crack Baseball America's Top 100 Prospects list. Starter Kyle Drabek, a leading candidate for a spot in the rotation this spring, came in at No. 29. Catcher Travis D'Arnaud, acquired from the Phillies with Drabek as part of the Roy Halladay deal, was 36th. Canadian infielder Brett Lawrie, acquired from Milwaukee in the Shaun Marcum trade in December, was 40th, while starter Deck McGuire, the 11th overall pick last June in GM Alex Anthopoulos's first draft, was 95th.