A heritage home on Jarvis Street has been destroyed after a massive fire early Monday morning.

The property which hadn’t been lived in for years was fully involved when fire crews arrived. And because the flames were shooting so high, the residence building used by university students was evacuated.

Sebastian Zhou had just moved into the building hours earlier and said he was getting ready for bed when he smelt smoke.

“I was getting ready for bed, and smelled something like bacon, and I saw downstairs there was a fire,” Zhou said.

He quickly pulled out his cell phone and took some remarkable video of flames reaching his 18th floor window. 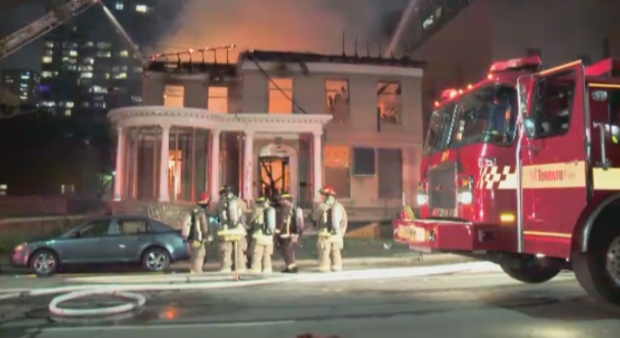 “Everything just turning red, and the fire just, the fire it was pretty close to my room, pretty close. Like my room is burning, but its not.” He also admitted he was a little bit scared.

This is the third fire in the home this year, and fifth since 2015 according to fire officials.

And because of a fire around a month and half ago, firefighters had to take a defensive approach as they battled the flames.

“There’s numerous holes throughout the floors, so we haven’t had any crews in. It was just deemed too dangerous to go into the building,” Platoon Chief Kevin Shaw told CTV News Toronto.

Fire officials don’t believe anyone was inside the home while it was burning. But residents in the area say it was a place where a lot of squatters sough shelter.

Toronto Fire Chief Matthew Pegg said the Ontario Office of the Fire Marshal will help his crews with the investigation.

That’s expected to start on Tuesday.

All day Monday local residents were stoping to look at the burned out building.

Fire crews were on scene dousing hot spots, and clearing up their gear.

The fire was also an unexpected show for tourists who were spending the night at the Ramada hotel next door. 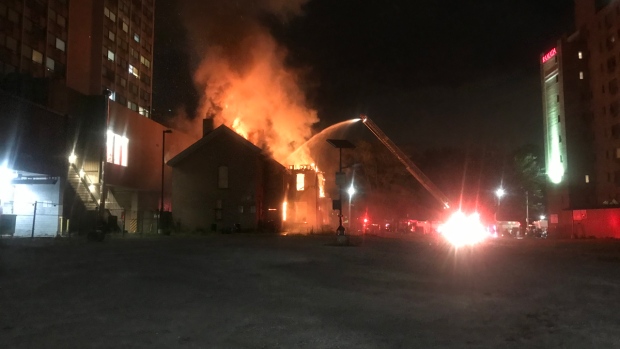 Terry Clarke and his wife were getting ready for bed, when they noticed the orange glow from their window. He called 911, and then took some cell phone video of the blaze.

“It went up really fast, and I mean I don’t know how many metres yards or whatever the hotel is away, but we could feel the heat right in our room on the fifth floor.”

He eventually got some sleep, but not before being impressed with how the fire fighters putout the flames, while keeping everyone in the area safe.