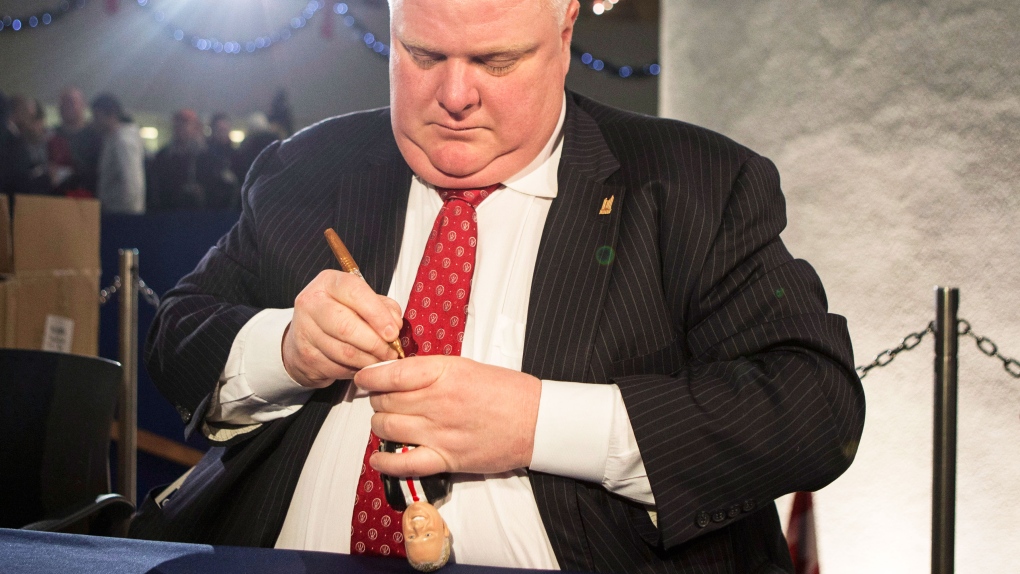 In this file photo, Toronto City Mayor Rob Ford signs a bobble head bearing his likeness, as over 1,000 people queued at city hall in Toronto on Friday, December 20 2013. (THE CANADIAN PRESS/Chris Young)

In a nod to his fans and healthcare providers, outgoing Toronto Mayor Rob Ford is selling off the last of his “Robbie Bobbie” bobbleheads and donating the net proceeds to two hospitals treating him for cancer.

Ford, who is battling pleomorphic liposarcoma, a rare form of cancer, announced in a statement that he will sell the last of his popular bobbleheads for $30 each at his office in City Hall, beginning Friday.

Money raised from the sales will go to Humber River Hospital and Mount Sinai Hospital, the two facilities where Ford has been receiving cancer treatment since his diagnosis in September.

“Over the past two months, I have been fortunate to receive excellent medical care as I continue to fight my battle with cancer,” Ford said in the statement on Thursday.

“I would now like to help the people who have helped me.”

The Ford bobbleheads have been a hot item in the past. Hundreds lined up to buy the “Robbie Bobbie” figures last December, when Ford’s crack-smoking scandal was at its height. Proceeds from those sales also went to a cancer charity.

But cancer has become a more urgent concern for Ford in recent months. He withdrew from the mayor’s race in September, shortly after receiving his diagnosis. Ford ran for a council seat instead and won in his old Ward 2 riding of Etobicoke North.

His brother, Doug Ford, took his place in the mayoral campaign and lost.

John Tory will move in to the mayor’s office on Dec. 2.