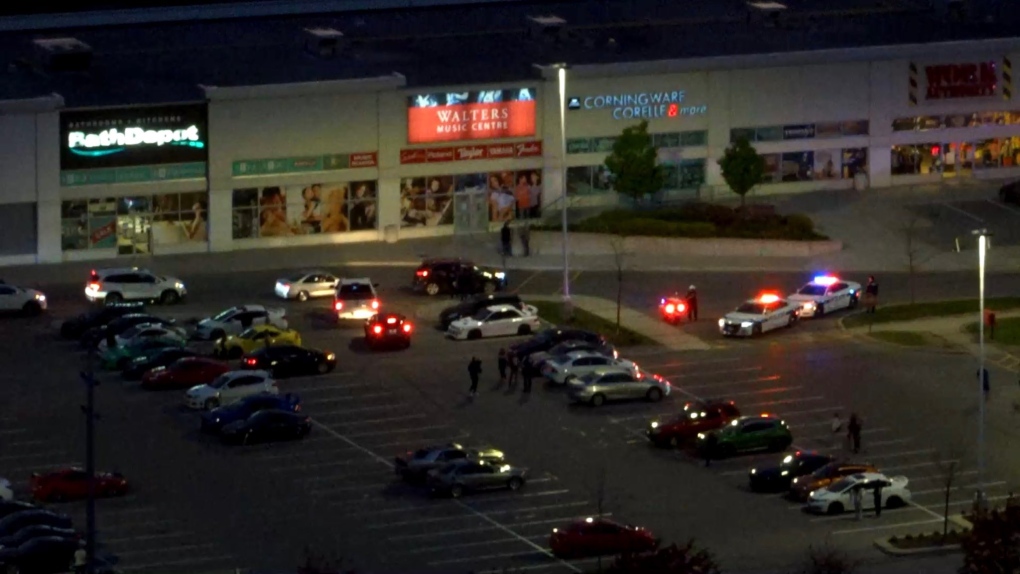 Vehicles are shown during a blitz at Heartland Town Centre in Mississauga on Friday night. Police issues dozens of bylaw citations and charges under the Highway Traffic Act. (Peel Regional Police)

TORONTO -- Peel Regional Police stopped hundreds of cars and issued dozens of tickets on Friday night as part of a crackdown on large gatherings in parking lots, some of which are believed to be related to illegal street racing.

The blitz took place in the vicinity of the Heartland Town Centre in Mississauga and resulted in the issuing of 112 bylaw tickets, 67 tickets under the Highway Traffic Act and the laying of two criminal charges.

“There has been a general disregard for rules particularly highway traffic rules. I have heard many people complaining about cars speeding and drag racing and people gathering in large groups late at night and of course Peel Regional Police heard about it too an now they are out late at night checking out these hotspots,” Mississauga Mayor Bonnie Crombie told CP24 on Saturday morning. “This is a joint effort and I want to really thank Peel police and bylaw enforcement for being so diligent.”

Gathering in groups is not okay, meeting to go out racing is not safe for anyone. @PRPRoadSafety was out in full force last night. 112 Bi-law tickets, 67 HTA, 2 Criminal charges and 370 car stopped. Working with @CityMississauga & @CityBrampton By-law #Community #SlowDown #PRP pic.twitter.com/yLAuwyL0aG

Police forces across the GTA have reported a rise in street racing and stunt driving charges since the beginning of the COVID-19 pandemic, likely as a result of largely empty roads.

Crombie said that going forward police will be “scouring large parking lots at big box malls where cars and individuals have been gathering late at night” and issuing citations and charges, where appropriate.

In a message posted to Twitter on Saturday morning, Peel Regional Police said that “gathering in groups is not okay” but doing so in order to go out street racing is even worse