Over 90 per cent of Grassy Narrows residents show signs of mercury poisoning: researchers 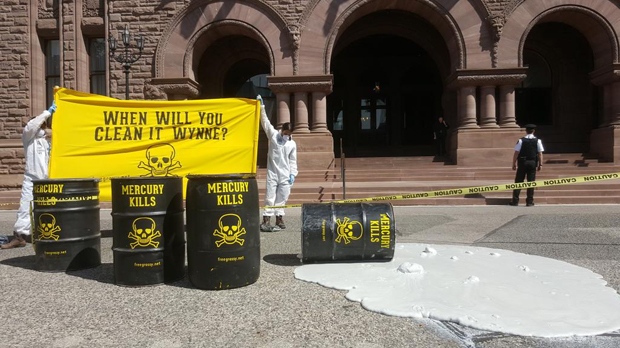 Protesters are seen outside Queen's Park with barrels of an unknown substance on June 23. (Twitter/@hussansk)

TORONTO -- The chief of the Grassy Narrows First Nation in northern Ontario says the federal and provincial governments must help his community overcome the effects of decades of mercury poisoning.

Chief Simon Fobister Sr. said in addition to serious health impacts, there was social and economic devastation when Grassy Narrows lost the basis for its economy when the local fishery was shut down in the 1970s because of the mercury poisoning.

"There were marital breakdowns, there was social upheaval, some suicides," said Fobister.

Japanese researchers reported Tuesday that they found more than 90 per cent of the people in Grassy Narrows and the Wabaseemoong (White Dog) First Nation show signs of mercury poisoning, including a new generation of residents.

The researchers say people who were not born when 9,000 kilograms of mercury was dumped into the English and Wabigoon River systems by a paper mill in Dryden, Ont., in the 1960s show symptoms of mercury poisoning.

Fobister calls it "shameful" that communities and people impacted by mercury poisoning have to fight for every bit of help they can get, and said he still wants a commitment from the province to clean up the local river.

"There's been no real, solid, clear commitment that a cleanup will take place if the scientists say it can be cleaned up," he said.

Premier Kathleen Wynne said the government remains reluctant to take any steps that could make the situation worse by stirring up mercury in the sediment of rivers and lakes.

"There isn't an easy solution," Wynne said Tuesday. "There is a contentious discussion about how to actually get the mercury out of that river system ... and so we need to work with the community to ensure that as that work is done, there isn't further poisoning or further contamination of people."

Fobister wants financial assistance for people suffering from mercury poisoning and help to restore the local economy, which was devastated in the 1970s when their commercial fishery was shut down because of the contamination.

Masanori Hanada of Kumamoto Gakuen University has studied mercury poisoning in the Japanese town of Minamata, where the first human patient of what later became known as Minamata disease was identified.

Hanada has also been the lead organizer of followup research trips to Grassy Narrows since 2004, and says the majority of the population is experiencing sensory deprivation, starting with the loss of feeling in fingers and toes.

"The mercury levels in the fish in the English and Wabigoon River are still high," Hanada said Tuesday as he released the results of his studies. "This confirms there is still mercury in the river system."

The symptoms of mercury poisoning can include usually permanent impairment of brain functions such as speech, sight and hearing, in addition to convulsions, uncontrollable limb movements and loss of balance.

Hanada called the fact that young people are affected by mercury poisoning "surprising," and said more research is needed to determine the root cause of their symptoms.

The New Democrats said every day the Ontario government fails to act on the mercury poisoning things get worse for people in Grassy Narrows and White Dog.

"It took researchers from halfway across the world to undertake this serious study, while the Wynne government continues to stall on taking action, putting families and the future of these communities at risk," said NDP environment critic Peter Tabuns.

Another report in June found mercury levels in Grassy Narrows remain dangerously high even though the plant that dumped 9,000 kilograms of it into the water closed in the 1970s, and suggested there may be an ongoing source of contamination.

Fobister called for an investigation after a former worker at the Dryden mill wrote the government saying he had buried more than 50 barrels of mercury and salt in a pit in 1972.

The environment ministry took some samples from the area last June in response to the claim, but the government said Tuesday it was not in a position yet to share the results.

Fobister admits many residents ignored the order to stop eating fish when the government closed the local fishery the 1970s.

"We have been heavy consumers of fish over those decades, and many of our people have symptoms of mercury poisoning," he said.