More than 15,000 people filled the streets of downtown Toronto on Friday afternoon for the city’s climate change rally.

Before the noon hour, the lawn outside of Queen’s Park was filled with protestors armed with big and bright-coloured signs reading statements such as “undeniable,” “act on your conscience – strike for climate” and “the environment is not your political playground.” 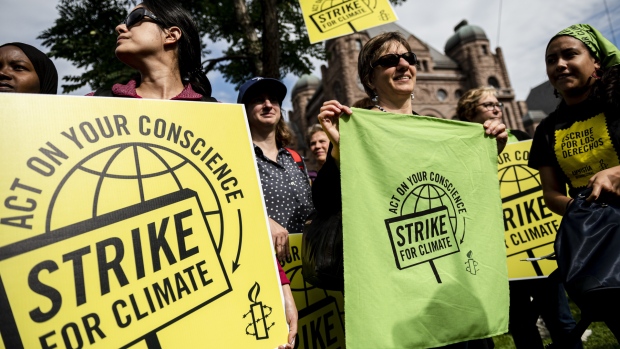 The event, which was aimed at youth empowerment, saw all age groups participating in a rally and march through the streets of downtown Toronto. Police estimated that 15,000 people attended the rally and about 20,000 participated in the march.

The event was held in conjunction with several other rallies happening across the country and around the world.

“We as youth, we need to stand up for something that is endangering all of us – not just here in Canada, but we already see so many effects in the entire world,” Annisa, a high-school student participating in the event, said.

“We need to change things, we need to get our government to say ‘we need to do this, we are currently in an emergency, our earth is currently warming up at an accelerating rate and we need to prevent that.’” 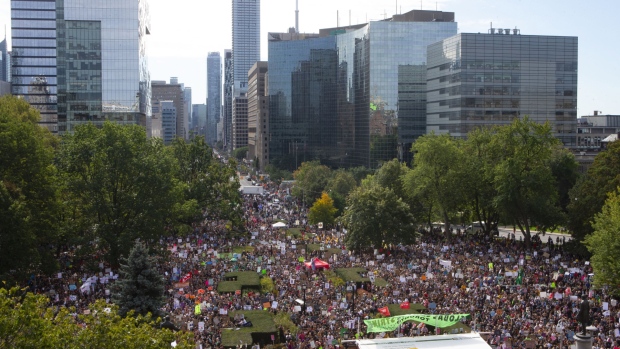 The group of students Annisa was with said “this is our future and we need to take control of it, we need to secure it.”

The online event page for the rally calls on the government to “treat the climate crisis like the emergency it is.”

“We can no longer continue with business as usual,” the organizers wrote. 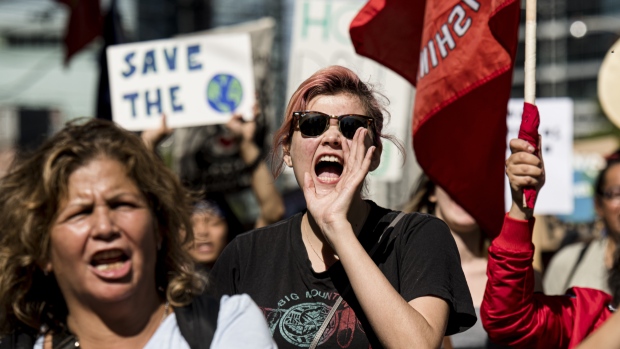 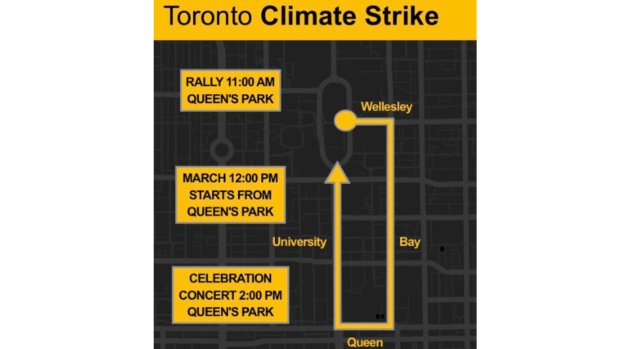 In response to the rally, Ontario’s Minister of Environment, Conservation and Parks Jeff Yurek said in a news release issued on Friday that he recognizes “all the young Ontarians who are making their voices heard on the serious issue of climate change.”

“I am proud to say that Ontario is leading the way when it comes to fighting climate change in Canada,” he said. “We have made significant reductions with emissions down 22 per cent over the last decade.”

Mayor John Tory said last week that he will move a motion at council for Toronto to join 800 other governments around the world in declaring a climate emergency.

Tory said he would lead the charge in “naming, framing and deepening Toronto’s commitment” to protecting the city’s community, economy and ecosystems from climate change.

“Climate change and global warming poses a major risk to our city’s residents and businesses,” Tory said on Sept. 20.

“This emergency declaration serves to join cities across the world in tackling climate change, frame the impact of climate change on our residents and businesses, and enhance Toronto’s commitment to a net zero carbon future.”

The motion will go before Toronto City Council on Oct. 2.

During the rally, the Toronto sign located outside of City Hall will be turned off, Mayor John Tory said.

Greta Thunberg, a Swedish teenager, is the inspiration behind the worldwide events. Earlier this week, the 16-year-old criticized world leaders at the UN Global Climate Action Summit in New York City.

Last year, Thunberg began staging solo climate strikes in Sweden, but since then tens of thousands of students across the world have taken part in “Fridays for Future” strikes. 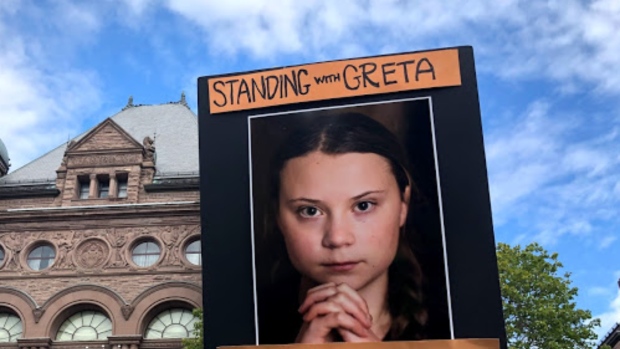 Getting around Toronto during climate change rally

To accommodate the large crowd at the event, TTC spokesperson Stuart Green said the transit agency made some adjustments to regular service.

Attending #ClimateStrike in Toronto tomorrow?
The #TTC is the environmentally friendly way to get there. Extra subway service being readied. Buses on standby for additional support. Expect surface routes on Bay, College, Dundas and Queen to be impacted during the noon-hour march.

“We will have two extra trains on Line 1 and Line 2 ready to go to handle extra loads in the core,” he said. “As well, we’ll have buses on standby for extra relief and backup in the event of any subway delays.”

“On the surface, we’ll have staff ready to assist keeping the streetcars moving if the crowds spread out.”

Green said transit riders can expect the Bay, College, Dundas and Queen surface routes to be impacted during the event.

Here is our live blog from climate change rallies happening across the country: