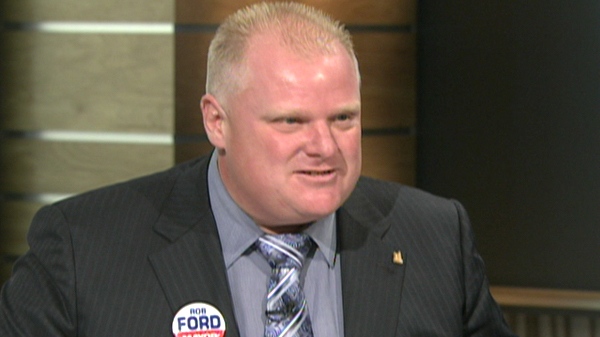 Rob Ford has taken a commanding lead in the Toronto mayoral race, with the support of nearly 46 per cent of decided voters, according to a new poll.

The Nanos Research survey, conducted for CTV, The Globe and Mail, and CP24, shows that Ford has the support of 45.8 per cent of voters who have decided who they would vote for if the election were held today.

The number is more than double his nearest rival, former provincial cabinet minister George Smitherman, who has the support of 21.3 per cent of decided voters.

A lead of that size, this late in the race, will make it difficult for another candidate to catch Ford, pollster Nik Nanos told CTV News.

"What really has to happen is for Rob Ford to make a mistake or some new sensational thing to come on the stage that would disrupt the Ford campaign, so to speak," he said.

Here are the full results for decided voters, although another 25 per cent are still undecided:

Ford's promise to rein in spending at city hall has resonated in the polls since he entered the race in late March and jumped almost immediately into a statistical tie for the lead.

Ford was upbeat on Sunday, but told CTV News his team was not celebrating just yet.

Smitherman, who took part in Sunday's AIDS Walk, was not deterred by the poll results, especially since 25 per cent of voters are still undecided.

"There are two candidates with the prospect of being mayor and I'm really hoping to marshal more people behind my vision for a city that's inclusive and that builds on Toronto's strengths rather than rips it apart," he said.

Rossi's campaign was forging ahead, despite slipping slightly in the polls. Campaign manager Bernie Morton said he is hoping to capture the anti-Ford vote.

"We expect that Torontonians are now going to rally behinda coalition-style candidate who can take on Rob Ford and it will be a horse race down to the end," Morton said.

The poll was a random telephone survey of 1,021 likely voters and can be considered accurate within 3.1 percentage points, 19 times out of 20. The polling took place between September 14 and 16.

With a report from CTV Toronto's Alicia Markson