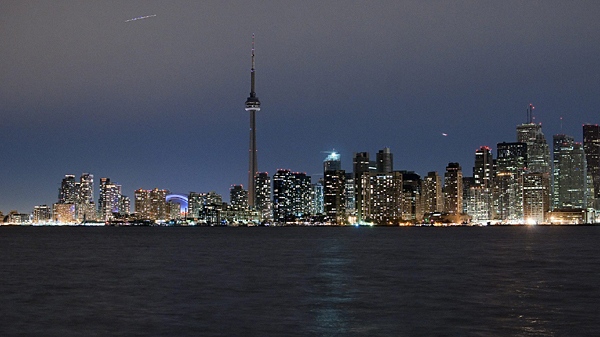 The darkened Toronto skyline is seen from Toronto Island at 8:30pm during the official start of Earth Hour on Saturday March 27, 2010. (Cole Burston / THE CANADIAN PRESS

Lights flicked off across the province Saturday night for an hour may seem like a drop in the bucket, but it's further evidence that energy consumption in Ontario is generally on the decline, said Terry Young, with the Independent Electricity System Operator.

"Earth Hour ... isn't something that obviously we're looking to see make a major impact in terms of electricity demand. What it is, is more of an awareness," he said.

"People were turning off their lights and stopped using as much electricity, and we could notice that. Any time we can notice something like that on a provincial scale then it does have some sort of an impact."

The 560-megawatt decline represented a four-per-cent decrease -- less than the six per cent seen in 2009 and five per cent in 2008.

The numbers more likely reflect the weather than a waning interest, Young said. The temperatures were much cooler this year than during Earth Hour last year, so even though lights were shut off, heaters were running, he said.

Compare that with 2006, when Ontario broke its hourly peak demand record at the end of a heat wave, with demand exceeding 27,000 megawatts.

While that difference can partly be attributed to a cooler summer in 2009, conservation programs are making a difference, Young said.

"Demand today is not where it was five or six years ago," he said.

Canadians joined people in more than 120 countries around the world who flicked off lights at home between 8:30 and 9:30 p.m., attended events illuminated by candlelight or watched iconic landmarks fall dark.

The World Wildlife Fund, which started Earth Hour in 2007 in Sydney, Australia, said more than 300 Canadian cities and municipalities had pledged to take part.