Toronto’s board of health has voted to ask the province to lift philosophical and religious exemptions for otherwise-required vaccines in schools, amid protests by anti-vaxxers at city hall.

“This is not moral,” one deputant told the board.

“I will not comply,” shouted another.

“These are our human rights.”

The city’s Chief Medical Officer had recommended asking the Ministry of Health to consider removing the non-medical exemptions currently permitted under the Immunization of Schools Pupils Act to prevent exemption rates from reaching “dangerously high levels” in Toronto.

“While the province has said they’re not open to that today, we’re asking them to consider it tomorrow,” Board of Health chair Joe Cressy said Monday. 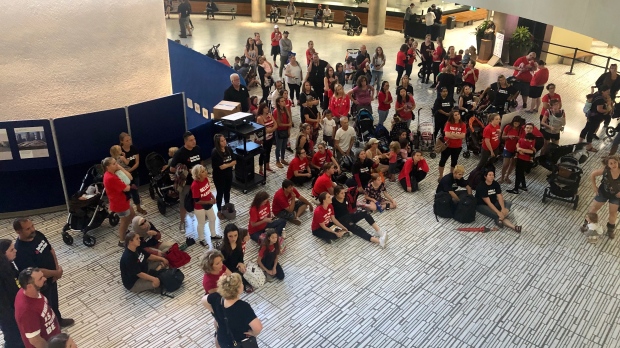 Dozens of anti-vaxxers gather in the rotunda of Toronto City Hall to protest the Medical Officer of Heath's recommendation to remove the philosophical and religious exemptions for vaccines in students. (Natalie Johnson/CTV News Toronto)

Toronto Public Health reports that over the past 13 years there has been a slow but steady increase in the number of parents opting for philosophical and religious vaccine exemptions for their children. The exemption rate of 0.8 per cent for the measles, mumps, and rubella vaccine in the 2006-2007 school year climbed to 1.72 per cent in 2018-2019.

“We want that response to be before we have an outbreak, before children die unnecessarily, before people live lives of illness because we couldn’t maintain our vaccination programs,” Dr. Allison McGeer, infectious diseases specialist at Mount Sinai Hospital, said outside the meeting.

Several dozen protesters gathered inside the committee room and in the overflow area during the debate, using jazz hands and the occasional outburst to support deputants who alleged that vaccines should not be mandatory in schools.

They erupted in cries of “shame” when the board voted to ask the province to remove the non-medical exemptions.

“Where there is risk, there must be choice,” Gisele Baribeau, director of Vaccine Choice Canada, said in the midst of the protest.

“People have a right to their opinion and their beliefs,” Dr. Eileen de Villa, Toronto Medical Officer of Health, said after the vote “But we have an important responsibility as the local public health department to ensure that we’re putting out the best available evidence.”

But despite Monday’s vote, the province told CTV News Toronto it has no plans to ban non-medical vaccine exemptions.

“The Ministry of Health is continually evaluating the best available evidence to improve the uptake of vaccines, reduce risk of disease outbreaks, and achieve better health for all Ontarians,” spokesperson Hayley Chazan said.

Currently, parents requesting a philosophical or religious vaccine exemption for their children must complete an education session before that request is granted. Unimmunized students may also be subject to a temporary exclusion from school in the event of an outbreak.

The World Health Organization has identified vaccine hesitancy - the reluctance or refusal to vaccinate despite the availability of vaccines - as one of the top 10 global health threats, and a growing concern in Canada.