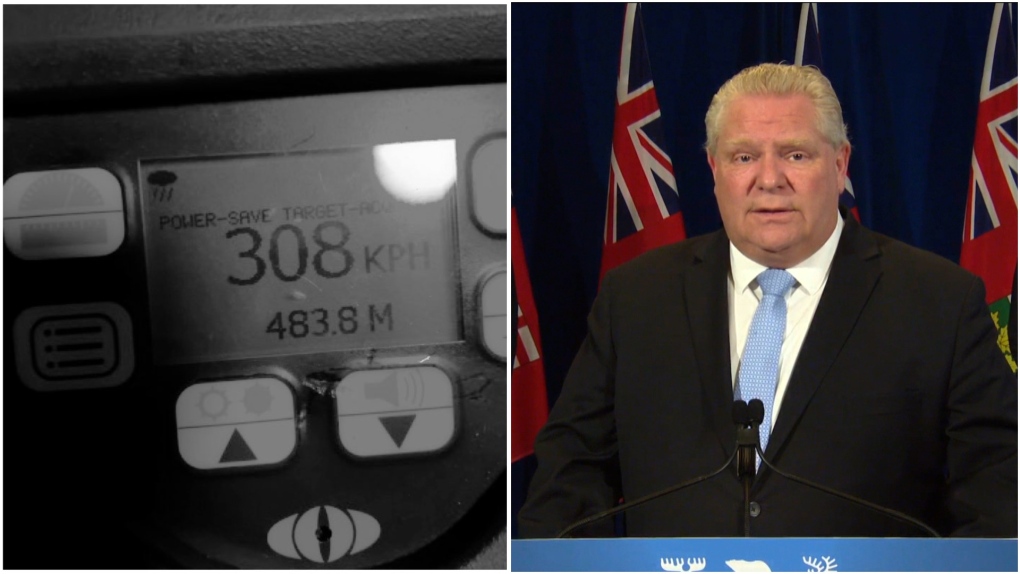 Premier Doug Ford lashed out at a young driver who was caught allegedly driving 200 km/h over the speed limit Saturday night on the QEW. (OPP)

TORONTO -- Premier Doug Ford is taking aim at a young driver who was caught allegedly speeding 308 kilometres an hour on an Ontario highway Saturday night.

“First of all that was reckless for that young man to do that. He put himself in jeopardy, his life and I guess he had one of his buddies in the car too,” Ford said speaking at a news conference Monday.

“You got to throw the book at these people, because they’re putting everyone’s lives in jeopardy when they do something that reckless and careless.”

The incident happened on the Queen Elizabeth Way (QEW) west at around 11 p.m. near Burlington, according to Ontario Provincial Police Sgt. Kerry Schmidt, who said it was the fastest instance of speeding he had ever seen.

“When the officer sent me the first picture of the laser that he had targeted that vehicle on and it showed 308 kilometres per hour, my first impression was, ‘oh yeah, that’s just a joke,’” Schmidt said in a video posted to Twitter on Sunday.

To put that speed in perspective, Schmidt added that he originally thought the arresting officer had taken a speed reading of a nearby plane taking off. 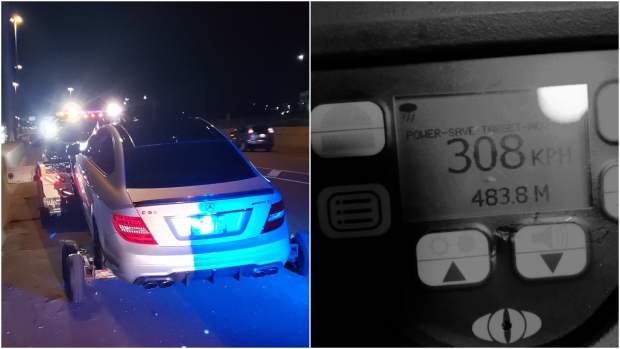 The 19-year-old driver has been charged with stunt driving under the Highway Traffic Act as well as a criminal charge of dangerous driving.

The vehicle, which belongs to the driver’s father, has been impounded for seven days and his licence has been suspended for the same period of time.

This is the standard protocol for drivers caught committing racing and stunt driving acts in Ontario.

Ford was asked about whether he would support extending that seven-day penalty to 30 days, to which he said “I do.”

“Especially in that young gentleman, should even be longer than 30 days of suspension someone going 200 kilometres over the speed limit. That’s staggering. Absolutely staggering.”

At the same time, the OPP says like many regional police departments, they too have seen an increase in dangerous driving incidents since the onset of the COVID-19 pandemic.

In fact, Schmidt says that the OPP have charged about 150 with street racing offences since May 1 in the Toronto area alone.