TORONTO -- The man who opened fire inside Eaton Centre’s food court back in 2012 has been sentenced to life in prison but he could be eligible for parole in as little as 16 months.

Christopher Husbands drew a handgun and opened fire in the food court on June 2, 2012, killing two people and wounding several others.

Ahmed Hassan, 24, died on the floor of the food court that day and Nixon Nirmalendran, 22, died in hospital nine days later.

Husbands was initially sentenced to life in prison without the chance of parole for 30 years after he was found guilty of two counts of second-degree murder.

But after successfully appealing the conviction, Husbands was awarded a second trial. 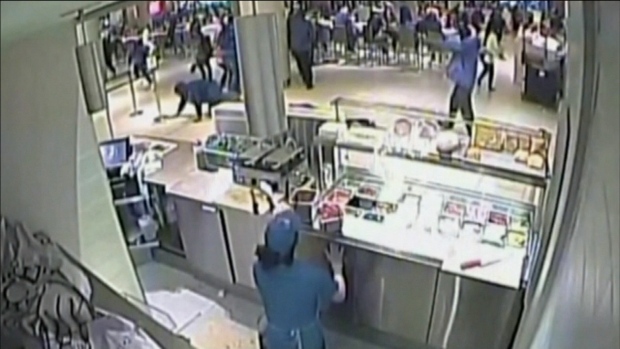 He admitted to shooting inside the busy downtown shopping centre on June 2, 2012, but during his second trial, his lawyers argued that his Post Traumatic Stress Disorder (PTSD) was triggered by an encounter he had with men who had assaulted him months earlier.

He was subsequently found guilty of two counts of manslaughter instead of murder.

On Friday, Justice Brian O’Marra handed Husbands concurrent life sentences on those charges with his parole eligibility set at seven years. Husbands smiled as he heard his new sentence.

The judge also gave Husbands 10 years credit for time served, meaning that he is already eligible for parole on the manslaughter charges. He was also found guilty on five counts of aggravated assault and one count each of criminal negligence causing bodily harm and reckless discharge of a firearm, for which he received a 14-year sentence. He will be eligible for parole on those offences in 2021.

O’Marra said he found Husbands was not in a dissociative state when he drew the hand gun and fired. 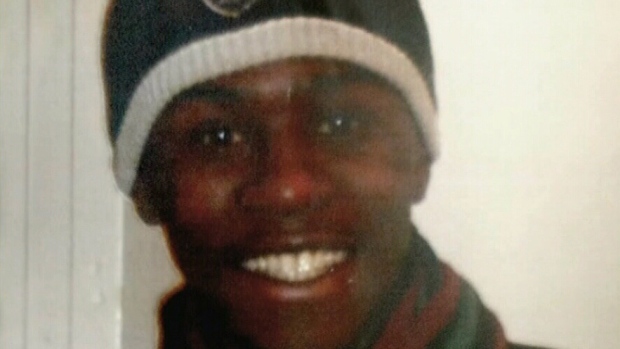 He said that while Husband’s PTSD diagnosis explained the speed at which the shooting unfolded, it was not a “main factor” in explaining what occurred.

O’Marra said Husbands “made a choice” that day to carry a loaded handgun despite being under a weapons prohibition, but did not intend to run into Hassan and Nirmalendran at the Eaton Centre, despite the fact that both men attacked him previously.

Court heard that Husbands was born in Guyana to a mother who had AIDS and later became addicted to crack cocaine.

He moved to Toronto to live with his father in Regent Park and admitted to selling drugs as a youth just to have the necessities of life.

He was convicted of multiple criminal offences from his preteen years to his early 20s.

O’Marra said he was convinced that Husbands was victimized as a youth and discriminated against due to his race, but said that “does not excuse criminal behaviour,” it only provides context for it.

“Mr. Husband’s is a resilient and optimistic person and we are able to say that he hopes to be able to get out into the community at some point and as he said make a positive difference,” his lawyer, Dirk Derstine, told reporters outside of court.

Derstine said that the sentenced handed down by the judge “is virtually a maximum sentence” in the context of a manslaughter conviction, albeit one that will have his client eligible for parole fairly soon.

He said that his client is “legitimately remorseful” for his actions.

This stands in contrast to what O’Marra said in court, citing letters Husbands wrote to his girlfriend while in custody and saying “I find his remorse is ambiguous at best.”

Derstine said that “he does not believe it is reasonably realistic” that his client would be released at his first opportunity for parole and it remains unclear whether he will even request a hearing in 16 months’ time. 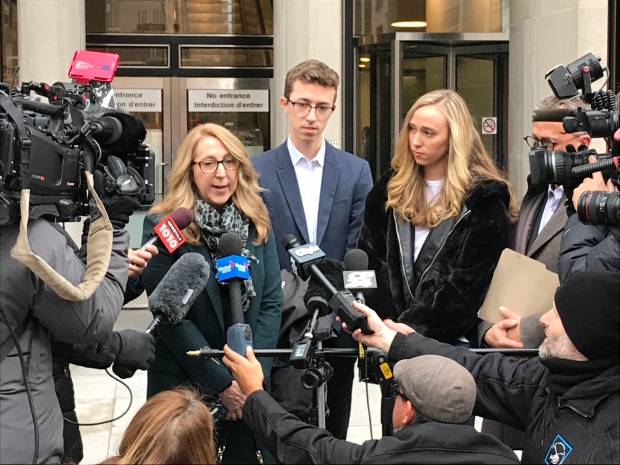 That said, at least one of Husband’s victims is expressing concern about exactly that possibility.

Connor Stevenson, who was 13 when he was caught in the Eaton Centre crossfire, told reporters outside court that he “feels scared for everybody in Toronto” when he thinks about the prospect of Husbands being released from prison anytime soon.

“I definitely will be attending some of the parole hearings and I hope that he doesn’t make parole,” he said.

Family says they were “re-victimized” by new proceedings

“I still have a plate in my head and bullet fragments in my brain,” Stevenson told CP24 on Friday afternoon.

His family fears that another serious blow to his head could be fatal.

But both Connor’s mother Jo-Anne and father Craig say they were determined to be present during each stage of both of Husbands’ trials, to earn a small measure of “relief.”

“We've always been there to support the whole endeavor with the prosecution team and it's just nice that we are now able to move forward,” Craig Stevenson told CP24 on Friday afternoon.

“The sad part is he will be applying for parole in the next year, or year and a half. And we will engage in that process as well . . . making sure that we go to the parole hearing, trying to keep him in.”

All of the Stevenson’s say they feel Husband’s first trial was fair, and the second set of proceedings just tore off their emotional scabs.

“We were re-victimized by the court process over and over and over again,” Craig said. “Not only sitting through and hearing the tales or the white lies that were taking place to help defend him, but using a technicality to overturn a conviction where he did receive a fair trial.”

Husbands’ first conviction was overturned and he was granted a new trial due to issues with the selection of the jury.

They say they watched and sat through the proceedings, feeling muzzled as the defence mounted efforts to argue the man who had shot Connor in the head was suffering from PTSD.

Jo-Anne Finney said she thinks Husbands is a coward, not a victim of bad circumstances.

“For (Husbands) to sit up there and use a defense that you know, ‘I've done all these bad things including killing people,’ you know, almost killing Connor and then to say, ‘well, you know, I had a mom who was a crack addict or something like that’.”

She said Husbands should have done something else other than seek vengeance against the men who had assaulted him.

“You know, I'm thinking what most people do is try to make themselves better. They try to move on. That's what real victims do.”

For his part, Connor says he hasn’t forgiven Husbands.