Ontario woman dies after contracting COVID-19 from husband who got infected at work, doctor says

TORONTO -- An Ontario woman in her 40s is dead after she contracted COVID-19 from her husband, who got sick after being told to go to work despite there being a known COVID-19 outbreak at the factory where he was employed, her doctor says.

Dr. Michael Warner, medical director of critical care at Michael Garron Hospital, said the woman's husband was told that since the outbreak wasn't among employees on his shift, he still had to go into work and wasn't entitled to pay if he chose not to.

Warner has not identified the family for privacy reasons, but said he's sharing their story in the hopes lessons can be learned about outbreaks in essential workplaces.

He also did not release the name of the company the man worked for.

"He was told to go work at this factory and he got COVID, so did everyone else on his shift, and they got the variant," Warner said Sunday. "It got brought home, their daughter got COVID and his wife got COVID."

He said the woman ended up critically ill and was admitted to intensive care.

"She started in a position where we could talk to her but then we had to intubate her," Warner said. "And then she got so sick we couldn't keep her alive with just a ventilator."

Warner said it took a team of 17 people to place the woman on a Extra-Corporeal Membrane Oxygenation (ECMO) machine, which is used to transmit oxygen into blood cells when the lung is so badly hurt it can no longer do that on its own.

It's used as a last-resort when a ventilator is not enough to treat a patient.

Warner said the woman was then transported to Toronto General Hospital, but died about 24 hours after arriving.

"She has a family, and unfortunately, they will never see her again," Warner said. 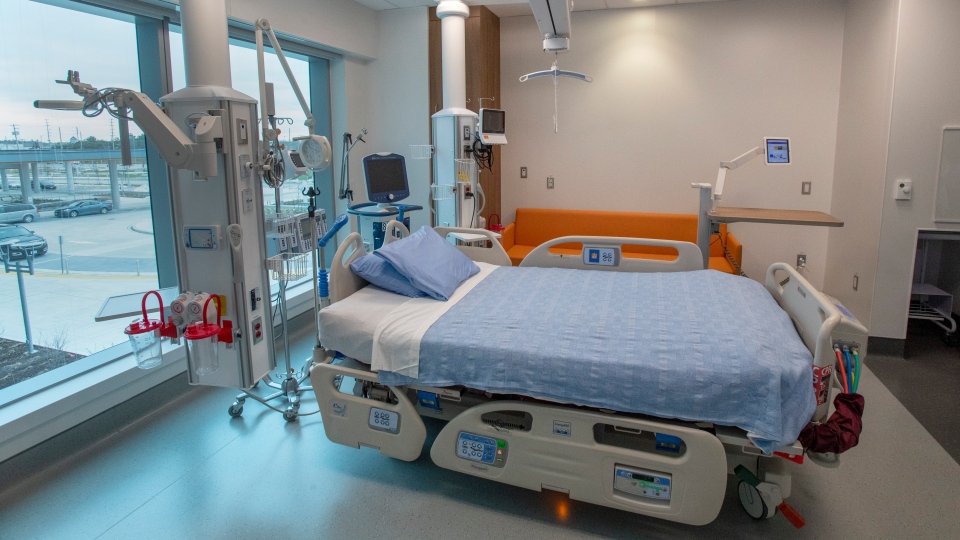 He said the closest the family got to any type of goodbye was watching her on Zoom while she was paralyzed and sedated.

"They never got to say goodbye and never will."

Tory says that the spread in areas where essential workers cannot stay home is unacceptable and the current regime of vaccine rollout is not reaching them.

The present vaccine priority phase, which began this month, includes essential supply chain workers, teachers and others who cannot work from home but shots have primarily still been aimed at the general population, ages 60 and up.

Meanwhile, intensive care admissions hit a pandemic high on Sunday, with more than 467 people currently being treated in Ontario hospitals, according to Critical Care Services Ontario.

Recent modelling suggested that even in a better than worse-case scenario, the number of COVID-19 patients in Ontario hospital ICUs might hit 800 by the end of April.

This is the story (shared with permission) of a patient in her 40s with #COVID we just intubated.

If @ongov provided essential workers with better protection, she would be at home with her family. pic.twitter.com/KfjFJPZYeu

Warner said that along with vaccinating essential workers, Ontario needs to institute a stay-at-home order in the Greater Toronto and Hamilton Area to prevent the healthcare system from becoming completely overwhelmed.

He also said the province should make it mandatory to conduct rapid COVID-19 testing of all employees at indoor workplaces with more than 10 staff members.

“"People don't see what I see," Warner said. "Which is why I'm on your station right now to tell you about my patient, to make it real for people."