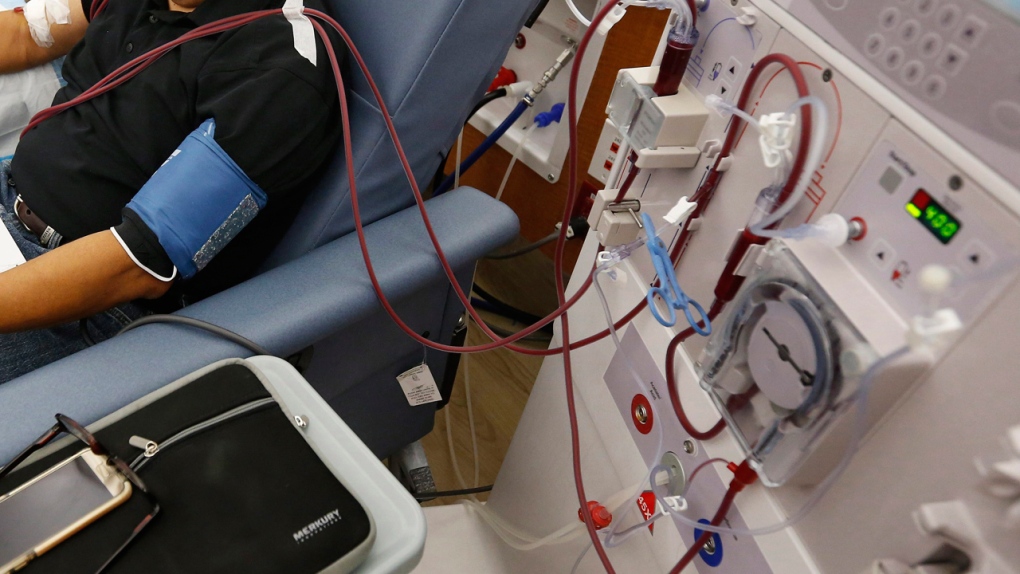 In this Monday, Sept. 24, 2018 file photo, a patient undergoes dialysis at a clinic in Sacramento, Calif. Results of a study released on Sunday, April 14, 2019 show that the diabetes drug Invokana has been shown to help prevent or delay worsening of kidney disease, which causes millions of deaths each year and requires hundreds of thousands of people to use dialysis to stay alive. (AP Photo/Rich Pedroncelli)

Patients with kidney failure are breathing a sigh of relief as the Doug Ford government announced on Thursday that their out-of-country dialysis treatments will still be covered by the Ontario Health Insurance Plan (OHIP.)

Health Minister Christine Elliott says the government is creating a $700,000 program to pay for the cost of receiving dialysis treatment outside Canadian borders beginning in the new year.

The Ford government was heavily criticized earlier this year for cancelling provincially-funded Out of Country Travellers program, which covered a portion of the cost of a hospital stay, a doctors’ visit or outpatient services up to a maximum of $400 per day.

At the time, the government argued the program was inefficient and carried a high administrative cost. The Ministry of Health says the province spent $2.8 million per year to administer approximately $9 million in claim payments.

After a six-day public consultation, the government decided to scrap the program entirely as of Oct. 1.

Ending the program, however, also meant denying patients on dialysis the ability to travel abroad since private travel insurance is typically not offered for that type of treatment. OHIP, on the other hand, covered up to $210 per treatment.

Elliott says it was clear the government needed to create a new program, which will provide the same reimbursement as the Out of Country Travellers program.

"This new program to fund out-of-country dialysis services will ensure hemodialysis patients can plan trips confident they can access the medically necessary services they rely on,” Elliott said in a statement.

Elliott says the government is also delaying the cancelation of the program until Jan. 1 to give insurance companies more time to adjust their travel policies.