Shiny and smooth, the first of the city’s latest batch of all-electric buses rolled out of the TTC’s Mount Dennis garage Saturday, as officials hailed the green technology.

“These new buses are clean and quiet, and very comfortable to ride on, and I think people will like them a lot,” Toronto Mayor John Tory said after a test ride.

The all-electric bus was one of 25 purchased from California-based Proterra Inc.—the second of three models the TTC is piloting in its bid to eventually to move to an environmentally-friendly fleet.

The Proterra buses will be based out of the Mount Dennis bus garage near Jane Street and Eglinton Avenue West and will run along the 6 Bay route to start.

“People do comment about having a much quieter ride, it’s very noticeable,” TTC CEO Rick Leary told CTV News Toronto Saturday. “They kind of enjoy it when they realize it’s an all-electric vehicle.” 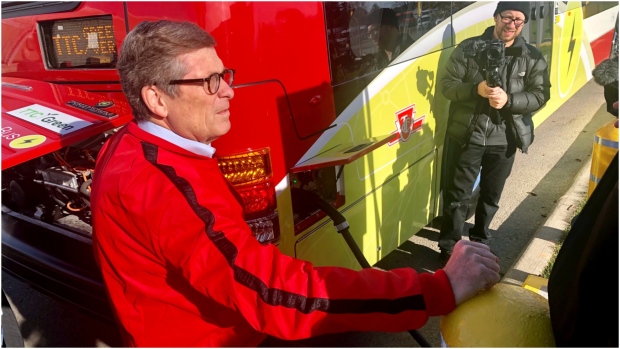 The city has already rolled out 10 all-electric buses from New Flyer Industries Inc., which are operated out of the Arrow Road bus division, and will receive a third model from BYD Canada; the goal is to assess how each of the e-buses perform while in service and make a bigger procurement decision from there.

“There are a slew of differences between these buses in terms of cost, in terms of the expected power consumption, the experience of the operators and maintainers, the accessibility of the buses,” Ben Case, head of TTC vehicle programs, said Saturday. “So we’ll be evaluating all of these things.”

The TTC is working to convert its full bus fleet to zero-emissions vehicles by 2040 as part of the city’s effort to reduce greenhouse gases and battle climate change.

The Proterra buses take about three hours to fully charge, and that charge lasts about 200 kilometres, depending on whether the bus is driven on flat land or hills and how much energy is used to heat the bus.

Emergency backup power generation will be available at the charging garages in case of power failure.

The TTC will operate 60 all-electric buses from the three manufacturers by the spring of next year, composing one of the largest mini-fleets of electric buses in North America.

“They are helping us with our climate change objectives, which a lot of people care very deeply about,” Tory said.

I look forward to seeing more of these eBuses on our roads as the #TTC increases the number of electric buses in service while expanding eBus charging infrastructure to a second location at the Mount Dennis Bus Garage. pic.twitter.com/hB5jBBG4tp