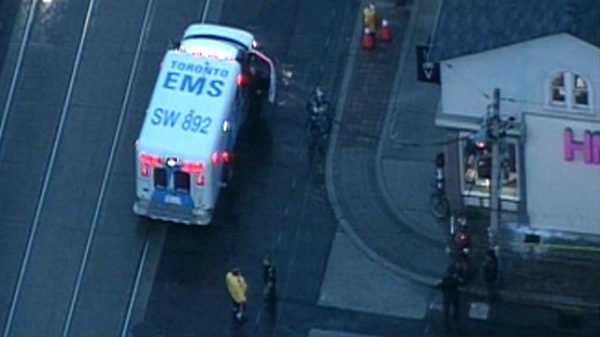 A Toronto police officer was taken to hospital for treatment of non-life-threatening injuries after a freak collision downtown.

"It is a weird one," Sgt. Tim Burrows of the Toronto Police Service's traffic unit told CTV Toronto on Wednesday.

A motorcycle had been in the curb lane of Queen Street West and then tried to navigate around a parked delivery truck around 6 p.m.

"In attempting to return to the curb lane, he lost it on the streetcar tracks," Burrows said, who noted there was rain at the time.

"The bike went down and slid in a northern direction. He went off to the south."

A police officer standing astride a bicycle at the intersection of Queen and Beverley Street got knocked down by the sliding motorcycle, which approached him from behind, he said.

The motorcyclist wasn't hurt, but the officer suffered back and leg injuries, Burrows said.

The scene was reopened to traffic shortly before 8 p.m.