TORONTO -- After 18 years as an officer with York Regional Police, Michelle Vincent turned in her badge earlier this month, and now she’s pledging to protect and serve members of the policing community.

“As a result of our occupation we’re 40 per cent more likely to suffer a serious mental health issue,” Vincent, who is finishing a PhD in psychotherapy, told CTV News Toronto. “Our members have nowhere to go when they are in crisis.”

Her passion-project, Haven, is based on a Quebec-based centre called La Vigile, a non-profit entity that has treated nearly 1,200 first responders since opening in 2012.

After a colleague committed suicide, Vincent said she knew she couldn’t sit back and wait for a treatment centre to open in her own province. In 2018, nine Ontario police officers took their lives.

“We run to what most of the community runs away from in terms of violence and horrific accidents. This [program] will save lives,” Vincent said.

Melissa Petriglia, a crisis intervention worker and psychotherapist, said the idea would be to have no wait time, specifically when officers are in crisis.

“First responders are exposed to high stress situations over and over again. A facility like this could keep them healthy and on the road longer,” she said.

The La Vigile facility in Quebec is funded through deductions from officers’ pay cheques, in addition to government support.

Vincent said she believes that formula could largely be cut and pasted in Ontario, and supplemented with donations from the private sector. 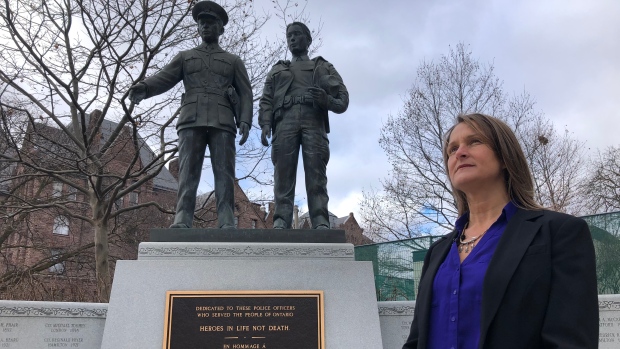 She said she would like to see a treatment centre within 45 minutes of Toronto, with a capacity to serve 15 to 20 patients at any given time.

“People are often afraid to get help because they’re perceived as weak. We are trying to break that stigma, but for those who do want help there’s long wait times, lack of resources and gaps in services.”

Vincent pitched her plan to government officials on Monday.

“The minister’s office met with the team from the Haven to begin a discussion around how success in the Quebec context could help develop solutions in Ontario,” Marion Ringuette, press secretary to Solicitor General Sylvia Jones, said.

“The mental health and overall well-being of Ontario’s frontline staff are an important priority for this government.”

“Frontline staff put their lives on the line each and every day to protect and serve the people of Ontario, and we are determined to do all we can to ensure they remain healthy and ready to serve.”