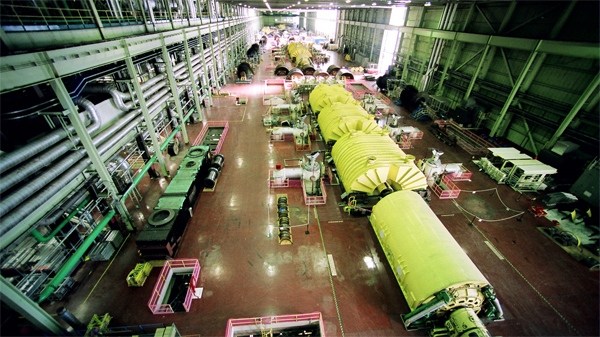 The Bruce A turbine hall is seen in this image courtesy Bruce Power.

TORONTO - A group of environmentalists has gone to court to challenge Ontario's plan to build new nuclear reactors, arguing the environmental risks and costs involved haven't been properly assessed.

Lawyers for Ecojustice and the Canadian Environmental Law Association have filed arguments in Federal Court on behalf of several green agencies, saying a review panel failed to carry out a proper environmental assessment on building new reactors at the Darlington station in Clarington, Ont.

Despite a push for green energy projects, Ontario remains committed to nuclear energy, which makes up 50 per cent of its energy supply, and is moving forward with the construction of two new reactors.

But the groups, which include Greenpeace, Lake Ontario Waterkeeper, Northwatch and the Canadian Environmental Law Association, argue the government provided only vague plans to the federal government-appointed review panel, which nonetheless recommended the project be approved.

They argue that, contrary to the requirements of the Canadian Environmental Assessment Act, the panel also didn't gather the evidence required to evaluate the project's need and possible alternatives.

They are asking Federal Court to order the review panel to take a second look at the project.

A proper environmental study, the groups add, is especially important after lessons learned from the disaster at Japan's Fukushima nuclear plant.

They also note that the government didn't select a specific type of nuclear reactor, making its possible impact difficult to assess.

"Despite the profound lack of critical information regarding the project's design and specific means by which the radioactive waste it generates will be managed, the (joint review panel) report purports to conclude that no significant environmental effects are likely," said the court filing, obtained by The Canadian Press.

That assumption implies that the "sizable information gaps" will be eventually considered by other bodies, and that "numerous to-be-determined mitigation measures" will be implemented.

Such a "leap before you look" approach, the filing adds, "is the antithesis of the precautionary principle, and should not be upheld by this honourable court."

Greenpeace nuclear analyst Shawn-Patrick Stensil says considering other alternatives is particularly important given skyrocketing hydro bills in the province as ratepayers "are still paying off the debt from building reactors in the 1980s every month on their electricity bill."

The filing comes as Ontario prepares to announce the results of its review of the Green Energy Act on Thursday.

The review of the feed-in-tariff, or FIT program, is expected to lower the lucrative premiums the province pays for future wind and solar power contracts, which the Opposition blames for rising electricity bills. It will also give Ontario municipalities more say, but not a veto over the location of wind farms and solar-power projects.