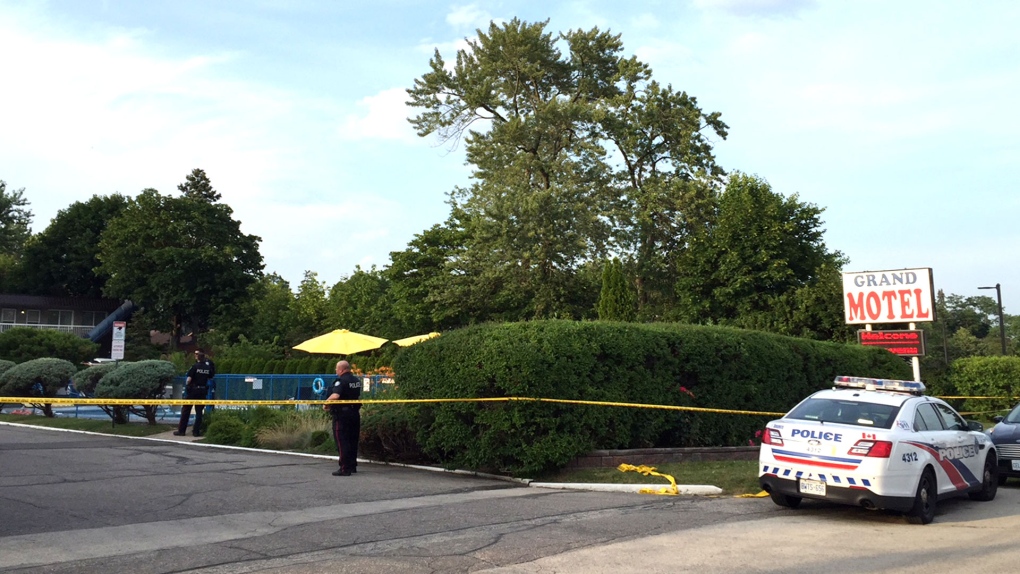 The scene of a reported drowning at a motel in Scarborough on July 19, 2019 is seen. (CTV News Toronto / Ricardo Alfonso)

A Toronto police officer who helped pull two men from the bottom of a motel pool in Scarborough last week says he was acting on both instinct and his training when he jumped into the water to rescue the victims.

Randall Arsenault and his partner were two of four officers who were called to the Grand Motel near Kingston Road and West Hill Drive on Friday evening for a reported drowning.

Speaking to CP24 on Monday, Arsenault said when they arrived on scene, two men were found unresponsive in the motel’s outdoor pool.

“One was towards the bottom and not moving and a decision had to be made,” he told CP24 on Monday.

He and two other officers pulled off their equipment, jumped into the water, dragged the lifeless men out of the pool, and began CPR.

“I guess that is part of what the training is for. I think a lot of it might be instinct,” he said. “I think most people would probably do the same thing.”

Firefighters and paramedics quickly arrived on scene and resuscitated the two victims, who were initially found without vital signs.

They were transported to hospital in critical condition. Police previously said that then men were unconscious but breathing on their own when they were taken in for treatment.

According to police, the incident appears to be accidental but the circumstances surrounding the near-drowning are not entirely clear.

Arsenault said while responding to these type of calls is just a part of the job, it can be an emotional experience.

“To go from nothing to a pulse is an emotional type of thing but yeah, it is in a day’s work because we went back to the station, we changed, we had dry uniforms, got back on the road later, answered another radio call,” he said.