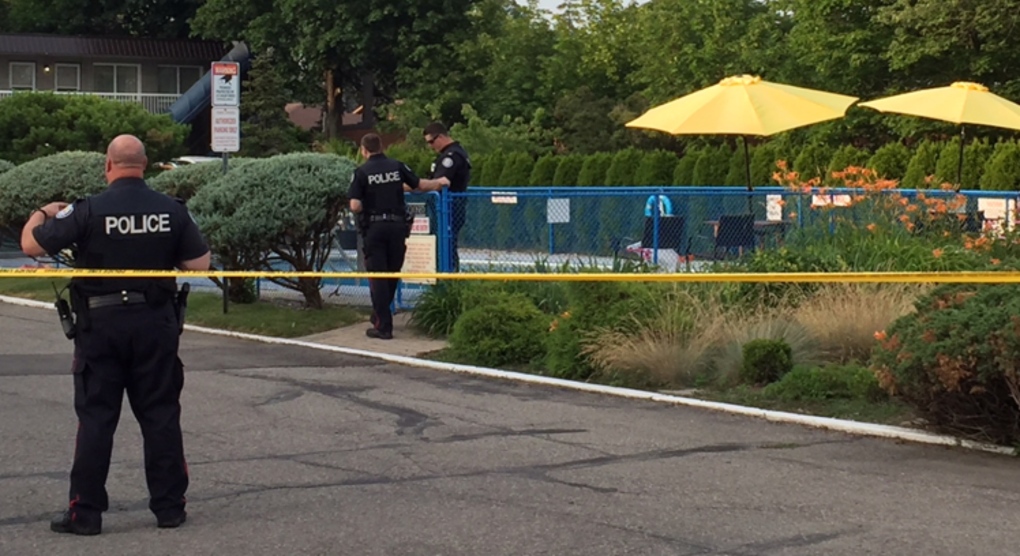 An investigation is underway after two men were found unresponsive in a Scarborough pool. (Ricardo Alfonso)

Two adult males were briefly without vital signs after being pulled from the bottom of a pool at a motel in Scarborough on Friday evening.

Emergency crews were dispatched to the Grand Motel near Kingston Road and West Hill Drive shortly after 6:30 p.m. for a possible drowning.

The officers, who were the first to arrive on scene, jumped into the pool and pulled out the victims. They then began to administer CPR until paramedics arrived and took over.

“Witnesses saw the two males go into the water, they came back approximately 10 minutes later and they were at the bottom of the pool unresponsive,” Gary Jenkins, of Toronto Paramedic Services, told CP24 at the scene. “Both gentlemen were vital signs absent but CPR was started, advance care and primary care was given and we were able to get pulses back on both at the scene.”

The victims were both rushed to hospital via emergency run and remain in critical condition.

According to police, they are currently unconscious but have pulses and are breathing on their own.

The circumstances leading up to the near-drowning remains unclear; however police say that it appears to be an accidental event.

There was a significant police presence at one point, however the investigation at the scene concluded at around 8:30 p.m. and the pool was returned to the motel.

“The investigation is still ongoing. The detectives will attend Centenary (hospital) and then go from there,” Sgt. Hrepic told CP24.