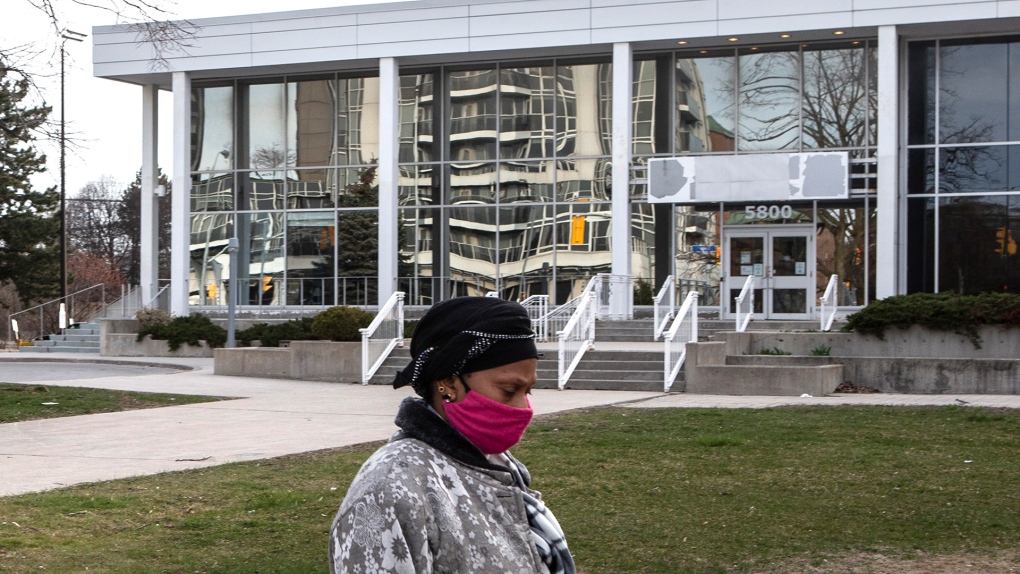 The Willowdale Welcome Centre in Toronto is seen on Monday April 20, 2020. The centre, which provides shelter for refugees, has reported 74 cases of COVID-19. THE CANADIAN PRESS/Chris Young

TORONTO -- A group of organizations that support Toronto’s homeless population are launching legal action against the City of Toronto, saying its failure to keep some beds in its shelters at least two metres apart constitutes a violation of residents’ charter rights.

Lawyers from the Advocacy Centre for Tenants Ontario, the Black Legal Action Centre, the HIV & AIDS Legal Clinic Ontario, The Canadian Civil Liberties Association and Aboriginal Legal Services say the close quarters in some Toronto shelters and respite sites violate sections of the Canadian Charter of Rights and Freedoms, as well as the Ontario Human Rights Code.

“If we are forced to litigate this issue, we will argue that the City is operating its shelter system and maintaining standards that are discriminatory and violate the right to life and security of the person of shelter residents under sections 7 and 15 of the Charter of Rights and Freedoms, and also breach the Ontario Human Rights Code,” lawyers wrote in a letter sent to Toronto officials this week.

They say the city is still using bunk beds and other sleep settings where beds are less than one metre apart, and not the two metres called for by provincial and federal health standards.

“Unlike the federal and provincial public health guidance, these Standards were not designed in response to COVID-19,” the lawyers write in the letter. “The Shelter Standards and Respite Standards are grossly inadequate in light of what is known about the virus, and the risks and manner of transmission.”

As of Friday evening, there were 135 lab-confirmed cases of COVID-19 in Toronto’s shelter network.

The City of Toronto responded Saturday, telling CP24 it has completed “unprecedented, determined and expedited” actions to protect shelter residents from COVID-19.

It says in a statement that it has increased space between beds “where possible.”

“A critical component of prevention work has been working closely with service providers to take steps to increase physical distancing measures on site, where possible, including reducing or eliminating the use of bunk beds. Shelters continue to meet the increased physical distancing guidelines of two metres.”

Officials say that as of April 24, they have secured 1,200 hotel rooms for use by shelter residents and set up 11 new facilities to house people in a physically distant manner.

“Some 770 people have been moved to hotel rooms and another 492 people to community space. The City has also provided $1.2 million to community partners serving the homeless community for personal protective equipment, and continues to work with the provincial and federal governments to provide adequate PPE.”

The city says it will respond to the suit “through appropriate court channels.”