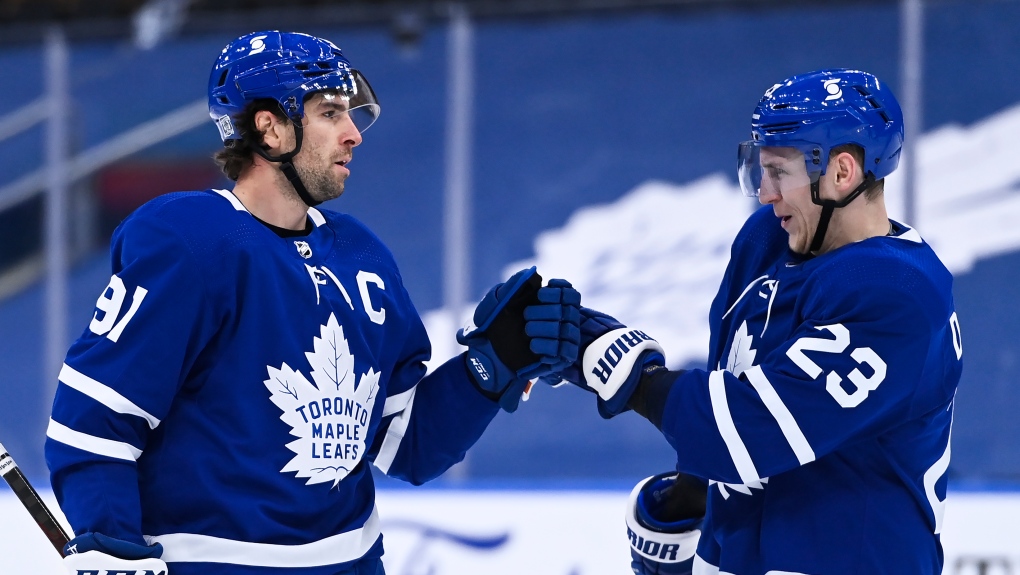 And that could very well be true.

It's also hard for the gritty Montreal Canadiens winger to ignore the impressive offensive numbers Toronto's dynamic 1-2 punch has put up so far this season.

Auston Matthews leads the NHL with 16 goals in 17 games, including an astounding 15 over his last 13 contests, to sit third in the NHL scoring race with 27 points -- behind only Connor McDavid and Leon Draisaitl -- while linemate Mitch Marner is two back in fourth thanks to his 19 assists.

"Those guys work really well together," Gallagher said as the Canadiens prepared to host the Leafs on Saturday night. "If you do a good job against those two, you obviously increase your chances of winning.

"And vice versa, if they do a lot of damage on you, it's going to hurt."

Montreal should be well-rested when the teams meet at the Bell Centre. The Canadiens are coming off their bye following last Saturday's hard-fought 2-1 victory in Toronto, while the Leafs played a trio of games this week against the lowly Ottawa Senators, picking up five of a possible six points.

Toronto sits first in the league's overall standings, owns the second-best winning percentage, and leads Montreal by eight points atop the North Division, although the Canadiens do have three games in hand.

"You understand teams are going to make moves," Gallagher said. "I've watched a lot of the games, but we know if we take care of our own business we'll be there at the end.

"We got off to a pretty decent start, but there's a lot of hockey to be played."

That's going to be coming quick for the Canadiens, who have 41 games in 77 nights on the docket.

"There's no letting off the gas," Montreal defenceman Ben Chiarot said. "It's every other day for two months."

Saturday marks the fourth of 10 meetings between the Leafs (13-3-2) and Canadiens (9-4-2) in this 56-game season truncated by the COVID-19 pandemic. Toronto won 5-4 in overtime at home on opening night and 4-2 in Montreal four weeks later before that 2-1 loss last Saturday at Scotiabank Arena.

Apart from recharging their batteries, Gallagher, who capped the Canadiens' third-period rally in their victory against the Leafs, said his team spent the week fine-tuning systems with so little practice time on the horizon.

"When bad habits leak into your game, it's really hard to get them out," he said. "You've got to catch them early."

Also on a 15-game point streak, Matthews has yet to score against Montreal this season, but has an assist in all three games, including last weekend when he stripped Phillip Danault behind the Canadiens' net to feed Marner for a 1-0 lead early in the first period.

"Those games are usually tight scoring, tight defensively," Matthews said. "You've really got to earn your offence and earn your chances.

"They're very well-structured. They have a lot of speed and a lot of skill. They don't make it easy."

Danault recovered from that early gaffe to play a strong game against Matthews and Marner, who along with Joe Thornton, combined to put up 11 points against Ottawa in Thursday's 7-3 victory.

"We've been playing against top lines every night," said Danault, flanked by Gallagher and Tyler Toffoli on Montreal's No. 1 trio. "It's not much of a different challenge. They're really good. They get one chance, they score.

"We've got to eliminate their chances and be in their face -- aggressive in our zone, not be too passive. We've got to build on what we did the last two periods against Toronto. We were in their face and we were playing our game."

The Leafs could have had three or four goals in that opening 20 minutes, but Carey Price held the fort long enough for his teammates to find their legs after losing two straight, and three of their last four, in regulation.

"It's been great to recover," Canadiens head coach Claude Julien said of the break. "We've got to pick up where we left off.

"That's easier said than done when you've been off for a week."

Montreal will also be hoping that time away from game action has helped its offensive touch. The Canadiens scored 44 goals in starting the season 7-1-2, but have put the puck in the net just eight times in their last five contests.

"We were pretty much scoring at will," Chiarot said. "If we needed one, we could press and get one. Everything just seemed to be going in. You get to the top of the standings and all of a sudden you're seeing teams' top games.

"They come out a little harder, they play you tighter defensively."

Leafs head coach Sheldon Keefe, meanwhile, described his team's game as a "mess" following that dominant first against Montreal the last time the Original Six rivals met. Toronto then blew a 5-1 lead before losing 6-5 in overtime to the last-place Senators, but rebounded with consecutive victories Wednesday and Thursday.

"It's a challenge when they're not rested," Keefe said of Montreal. "They are now and have had a week of practice to prepare for us, along with some time off. It's a strange situation.

"We're expecting them to be real good."

Gallagher said it's tough to know how a team will respond out of the gate after a long stretch on the sidelines.

"It's just a matter of us starting the game on time," he said. "Hopefully we're sharp ... and we can use the fact we're the more rested team."

The Canadiens would be well-advised to put that advantage to good use while their legs are fresh, because there won't be much down time between now and May.