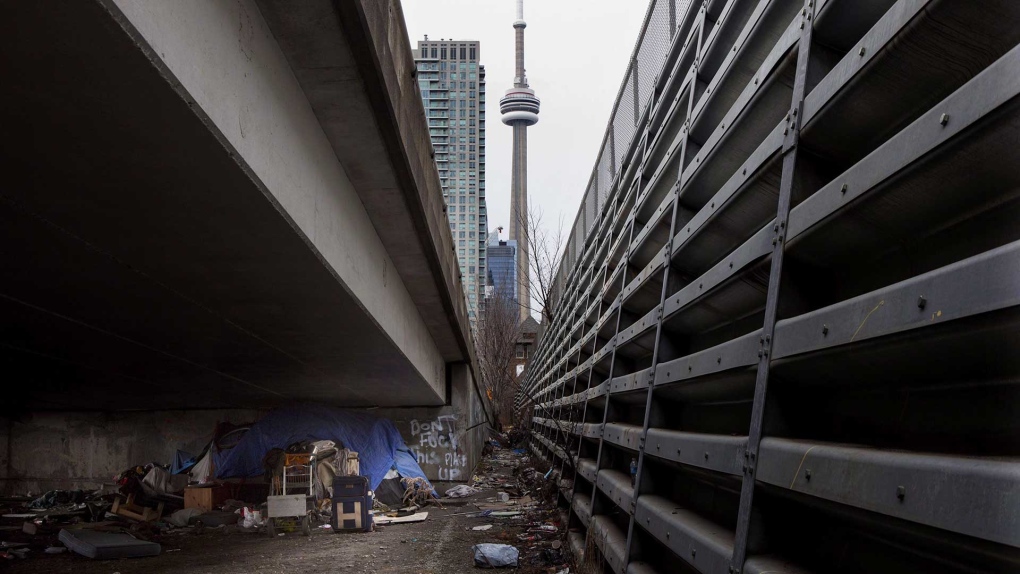 A makeshift home is seen in Toronto on March 1, 2018. THE CANADIAN PRESS/Chris Young

TORONTO -- The City of Toronto is asking a court to order a local man to stop building small wooden shelters for the homeless.

The city filed an injunction application on Feb. 12 against Khaleel Seivwright, a carpenter who has been building small structures for those living outside.

The city wants an order that permanently stops Seivwright from placing or relocating structures on city-owned land.

It cites bylaws that prohibit camping and living in city-owned parks.

Seivwright did not immediately respond to a request for comment.

He has been building the shelters since the fall and has raised more than $200,000 on GoFundMe for materials.

Homeless encampments have popped up throughout the city as hundreds fled shelters last year for fear of contracting COVID-19.

Seivwright's insulated, wooden "tiny shelters" are in numerous parks around the city.

"I'm makin this post to let you all know that we have stopped building Tiny Shelters but will continue to do maintenance and relocating of shelters as people staying outside get into housing," Seivwright said on his GoFundMe page on Feb. 11.

The city said in a statement that the structures are not safe.

It pointed to a wooden structure fire this week at an downtown encampment that claimed the life of a man as proof of the dangers.

It isn't clear who built the structure involved in the fire. The cause of the blaze remains under investigation.

Those living in encampments have said they have nowhere to go with shelters at or near capacity and concerns about the novel coronavirus.

A COVID-19 variant has made its way inside one of the city's shelters and there are currently outbreaks in seven shelters.

The city has carried out a massive relocation effort to reduce the population at its shelters, which are mostly congregate settings, by moving individuals into hotels and apartments and permanent housing.

The homeless have said that is not a solution for everyone as many of the hotels are far from services they use, which are largely clustered downtown.