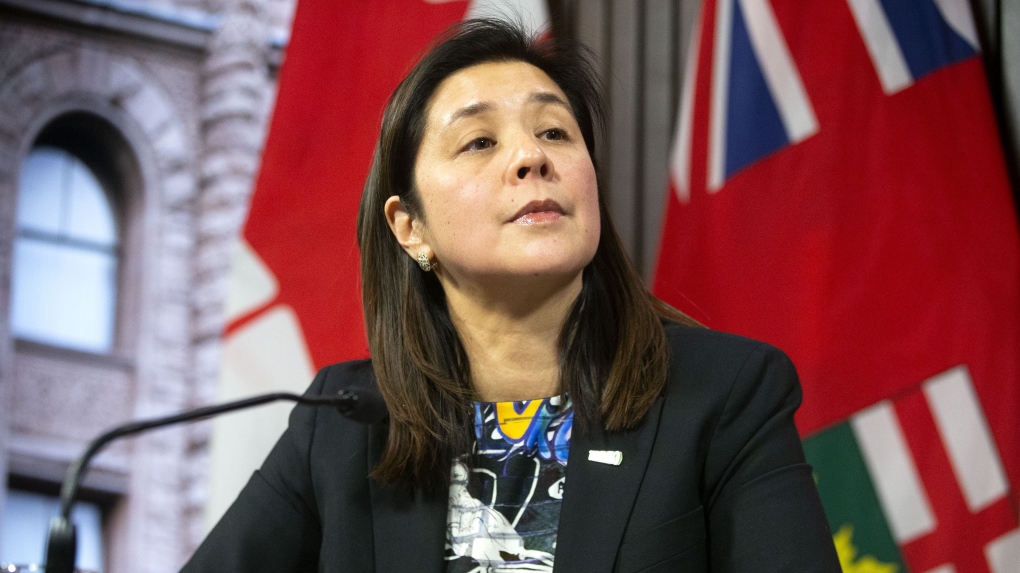 FILE -- Dr. Eileen de Villa, Medical Officer of Health for the City of Toronto attends a news conference in Toronto, on Monday, January 27, 2020, as officials provide an update on the coronavirus in Canada. THE CANADIAN PRESS/Chris Young

TORONTO -- Toronto’s top doctor is making a renewed appeal to residents to limit close contact with individuals outside of their households amid a “resurgence” of COVID-19 that has resulted in dozens of cases traced back to weddings and “everyday social events,” like play dates and family gatherings.

Toronto’s seven-day rolling average of new COVID-19 infections had dipped to 16 at one point in August but has risen steadily since then and now stands at 78.

At her regular briefing at city hall on Wednesday, Toronto’s Medical Officer of Health Dr. Eileen de Villa said that the rise in infections has now pushed the city’s reproductive number to 1.2, meaning that each person who contracts the virus gives it to 1.2 other people on average.

She said that with those numbers there is a “real chance” that “new restrictions will have to be imposed,” unless Torontonians can collectively curtail the epidemic once again.

Public health officials typically say that any reproductive over one points to a growing epidemic and is a red flag.

“We are in a transition period as we approach the fall and winter months and we are at a crossroads too. No one person will decide what happens next. It is what we do together that will inform what happens as a result,” de Villa said. “As much as possible limit your contact with people who don’t live with you. Ask yourself if where I am going is somewhere I need to go or somewhere I want to go and if you only want to go can it wait or is there a low contact way to do it and no matter where you go or what you do watch your distance, wear your mask and wash your hands when you get home again.”

Premier Doug Ford has mostly blamed the increase in cases on big backyard parties and has promised new restrictions on allowable gatherings in the hardest-hit areas of the province – Toronto, Ottawa and Peel Region.

De Villa, however, pointed to a much more diverse list of events and get together which are driving the rise in infections in Toronto.

She said that in the six weeks since Toronto entered stage three of the province’s reopening plan, about half of all new cases have resulted from close contact with an individual who tested positive for the virus and another 20 per cent have been attributed to community transmission, meaning that contact tracers have been unable to identify the source of the infection.

De Villa said that some of the most common sources of infections have been large family gatherings in which people “let their guard down” and interact without following the public health guidelines and weddings.

In fact, she said that Toronto Public Health is aware of 22 different infections tied to just four weddings where guests were interacting in close quarters.

She said that there has also been a rise in workplace infections, including one restaurant in which four employees and two patrons tested positive and two other unspecified establishments where there were a combined 11 cases among staff and four among patrons.

Interestingly, de Villa said that infections in bars and restaurants have tended to circulate more often between staff than between patrons.

She didn’t provide a specific reason for that but said that investigators have generally noted that “people are coming to work with symptoms and working during the time they are infectious.”

“I cannot stress enough that if you know you are sick or think you might be the first thing to do is to deal with your symptoms and keep apart from others as much as possible,” she said.

City hopes to avoid another lockdown

De Villa has been warning about an “inevitable” second wave of COVID-19 for weeks now and the numbers seem to back that up with the province now regularly reporting some of its highest daily counts of new infections since June.

At Wednesday’s briefing, Mayor John Tory said that de Villa has been clear with him about the need to reduce social gathering limits, increase enforcement on existing restrictions and expand the mandatory mask requirements, all things that he said that the city hopes to undertake take in “the coming days” with support from the province.

Tory said that the hope is by taking these steps now the city can avoid another lockdown similar to the one that shuttered non-essential businesses in the spring.

“That was a sledgehammer. It was a needed sledgehammer at the time but now we actually have the ability and the knowledge to respond with more tactical kind of responses that target the exact behaviours that we know are helping the spread of COVID-19,” he said.