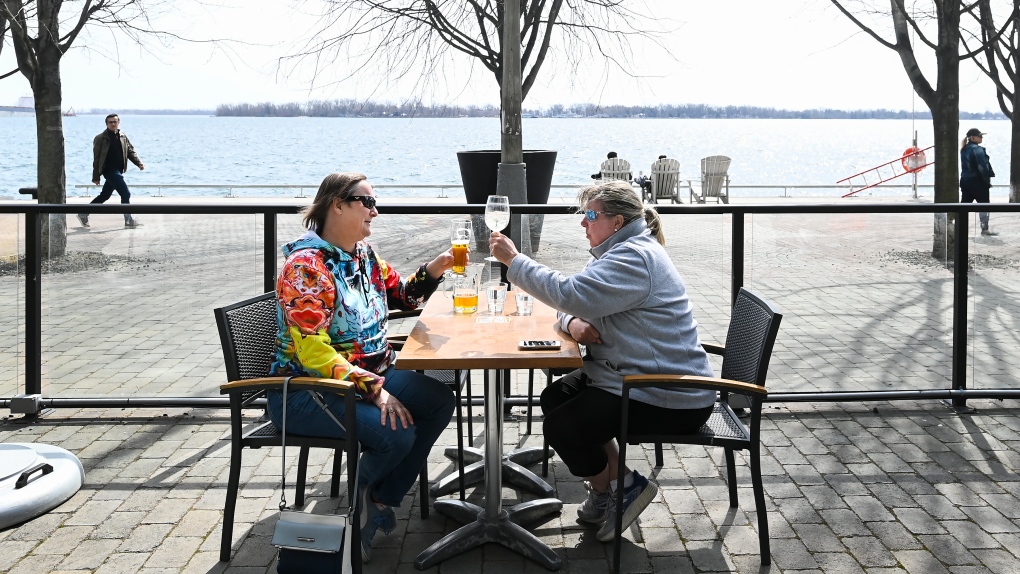 Diana Blaikie, left, and Bonnie Ryder have a cocktail on a outdoor patio at the Grain Urban Tavern while enjoying the warm weather along the boardwalk during the COVID-19 pandemic in Toronto on Thursday, March 25, 2021. THE CANADIAN PRESS/Nathan Denette
TORONTO -

Toronto council has voted in favour of making the CafeTO program a permanent fixture of city life.

The program was first established in the summer of 2020 as a temporary initiative to help struggling bars and restaurants during the COVID-19 pandemic and was then expanded this summer, allowing more than 1,200 businesses to set up temporary sidewalk and curb-lane patios.

Last month staff released a report recommending that the program be revived once again in 2022 and eventually made permanent sometime in 2023 with the creation of a new “streamlined” registration process so that participating businesses can operate expanded patios year-round without having to reapply.

During their meeting Wednesday, council voted 24-0 in favour of those staff recommendations, effectively paving the way for the creation of a reimagined CafeTO.

Staff will now have to report back in the first quarter of 2023 with a plan to make the program permanent.

That plan is expected to include a draft fee structure that would help the city recoup some of the costs associated with operating the program. Those costs are pegged at $5 million in 2022.

Staff will also conduct a pilot project in 2022 to look at creating designated loading and unloading zones along commercial corridors where a significant percentage of on-street parking spaces have been taken up by CafeTO patios.

“This has saved businesses. It saves a lot of businesses,” Tory said of the program immediately prior to council’s vote on Wednesday. “And it is not just a short term need. I think if you look from the economic vitality standpoint, both with regards to the vitality and survival of the individual businesses and the collective wellbeing of our main streets and other streets that were so damaged by the pandemic not only would you conclude that you should continue with this program but the reality is that many, many of these business are going to be digging out for quite some time from the effects of this pandemic.”

There were approximately 940 curb lane closures to accommodate expanded CafeTO patios this year, resulting in about 12 linear kilometres of public space being turned over to bars and restaurants.

During Wednesday’s meeting several councillors did raise concerns about potential traffic impacts from the closures, including Etobicoke councillor Stephen Holyday.

Staff, however, indicated that it will take more time to fully determine what impact CafeTO has had on congestion, given that commute times vary so widely from neighbourhood to neighbourhood.

“I am very worried about next year. I am worried that we are at 85 per cent (of pre-pandemic traffic levels) and maybe we'll be at 120 per cent by this time next year in terms of congestion because I don't think people are returning to the TTC. I think they're relying on their vehicles to get in and out of the city and the worry is there will be a backfire effect from this,” Holyday said during the debate. “It sounds like we're going to put the program forward and see what happens over the course of 2022 and there's risks in doing that. “

As part of the motion approved on Wednesday staff will be asked to take into consideration several concerns in crafting a permanent CafeTO program, including the impact on vehicle congestion and transit, the impact on the movement of goods and the impact on road maintenance and capital work.

They will also be asked to report back on the possibility of allowing more permanent structure as part of the CafeTO program.

Transport Minister Omar Alghabra is testifying before the House of Commons transport committee this afternoon about ongoing airport delays and flight cancellations.

Prime Minister Justin Trudeau nominated Ontario judge Michelle O’Bonsawin to the Supreme Court of Canada on Friday. She is the first Indigenous person to be tapped to sit on Canada's top court and the appointment is being celebrated as filling an important role at the highest level of the country's justice system.

A 81-year-old Danish woman traveling from Africa to Canada was arrested at Warsaw airport on suspicion of illegal possession of heroin worth over US$515,000, officials in Poland said Friday.

A prominent Quebec cardinal is denying sexual assault allegations against him contained in a class-action lawsuit that was formally filed this week in Quebec Superior Court.

Back to school: A look at the COVID-19 rules in place across provinces, territories

As students across Canada gear up to enter what will be their fourth academic year in the pandemic, CTVNews.ca takes a look at what measures will be in place in schools, by province and territory.

Nunavut's acting minister of community and government services says the territory has declared a state of emergency in Iqaluit to ensure the city can begin replenishing its water reservoir without delay.