Some police vehicles were vandalized during Raptors celebrations 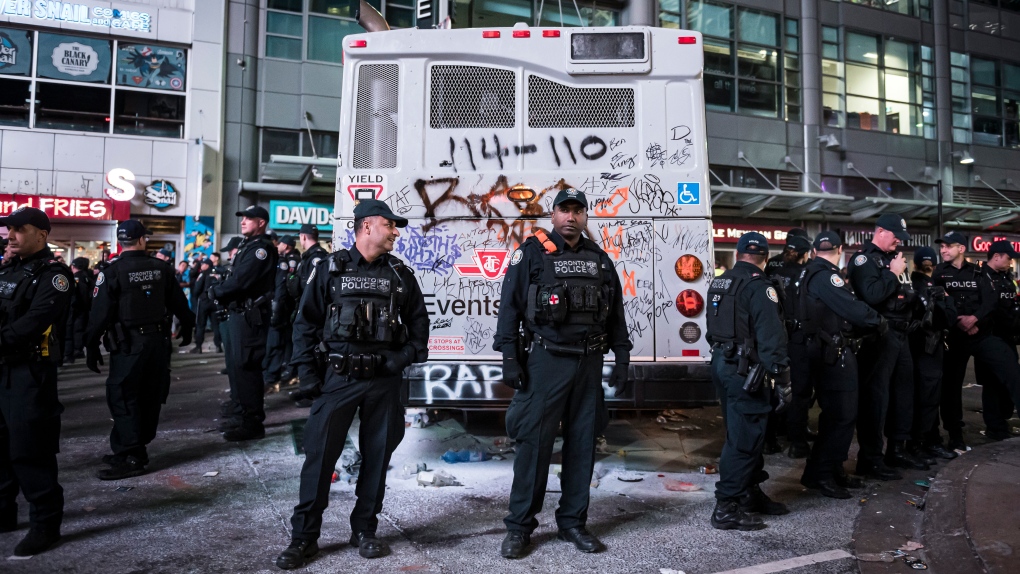 Police watch over a bus which was damaged after Toronto Raptors supporters celebrated in the streets after the Raptors defeated the Golden State Warriors during Game 6 NBA Finals to win the NBA Championship, in Toronto on Thursday, June 13, 2019. THE CANADIAN PRESS/Christopher Katsarov

Police say that there were no arrests as thousands of fans flooded the streets to celebrate the first NBA championship in Raptors franchise history overnight.

Supt. Michael Barsky tells CP24 that at least 10,000 people descended on the Yonge and Dundas streets area after the Raptors defeated the Golden State Warriors in Game 6 of the NBA finals late Thursday night.

He says that while two police cruisers, a bus shelter and several TPS special events buses were vandalized, celebrations were otherwise kept under control by the estimated 150 officers on scene.

Police are investigating a shooting that occurred near Yonge and Gould streets overnight, though it is unclear whether it is connected to the celebrations.

“All in all it was quite a good celebration. I know that there was damage done but nobody directly in Yonge-Dundas square was injured in any way,” Barsky said.

On Friday morning, several TTC special events buses that were parked on Yonge Street to contain the crowds could be seen with their windows smashed out and graffiti on them.

There was also a police cruiser parked near York and Harbour streets that had its windows smashed out and a dented roof.

Barsky, however, said that the damage was minimal given the size of the crowds.

He said that while there was probably 50 to 75 people who got “out of hand,” most people celebrated responsibly.

“They are really just property offences,” Barsky said. “Yes, some people got carried away but when you consider that there was probably in excess of 10,000 people in this square (it’s not that bad). There was no fights, there was no high tensions and there was no injuries in any way or form.”