TORONTO -- Toronto police say a 15-week project that was put in place in response to a spike in gun violence in the city this past summer led to thousands of charges and hundreds of arrests, but, admittedly, does not get to the root of the problem.

“Our children aren’t born gangsters, no one is born a gangster, it’s not a biological imperative,” Supt. Steve Watts told reporters at a news conference held at Toronto Police Headquarters on Friday afternoon.

Watts listed off numbers he said proves the initiative, dubbed Project Community Space, to be a success, but when asked about getting to the root of the issue at hand, he stated “there is no simple solution.”

“Education, prevention, intervention, suppression, it all has to work hand-in-hand,” he said.

“By the time someone is 16 or 17 years old and decides to pull out a gun and shoot me in the chest, there is a lot of water under the bridge that has happened to that date so that is where all the rest of our social assets, all the rest of the whole community comes into play.” 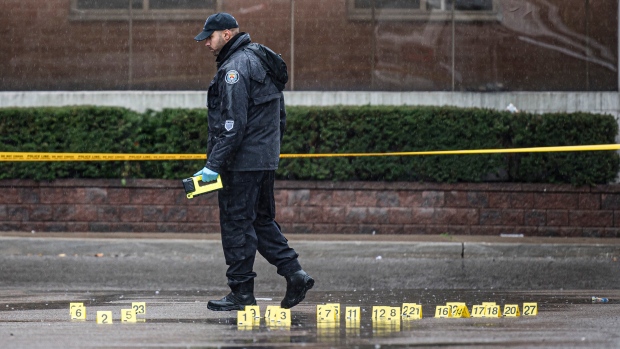 Watts added that a multi-faceted approach includes cooperation from “the criminal justice system, the education sector, public health, community agencies, and community mobilization, right down to the very youngest ages.”

The project, which was announced on Aug. 14 by Toronto Police Chief Mark Saunders amid a spike in shootings across the city, was scheduled to conclude on Oct. 31. The project was then extended as the city continued to see an uptick in the number of shootings.

The project received a total of $4.5 million in funding between all three levels of government.

“This is important and because of this funding investment came the ability to implement a strategy without negatively impacting our regular frontline policing services,” Watts said.

In total, Project Community Space led to 1,145 charges being laid and just under 250 firearms being seized.

“Of the 463 arrests made, 97 of these individuals were out on firearm related bails,” Watts said. “Sixteen of those were charged with new gun related offences, as well as other charges.”

“Further, this project has allowed our officers to conduct 2,392 bail compliance checks within the city.”

He said he is hoping the initiative will be extended, but noted that the funding has been used in its entirety.

The decision will ultimately be made by Saunders at an unknown time.