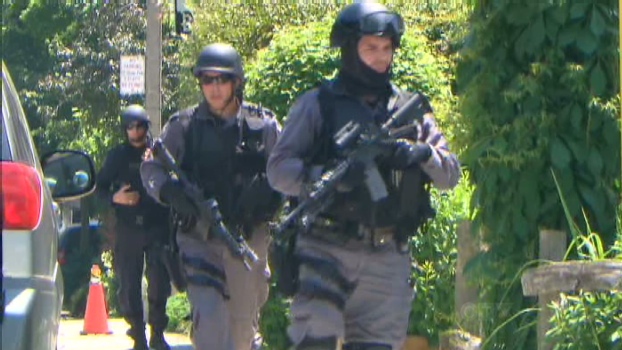 TORONTO -- Police are refusing to confirm any link between a man arrested today in relation to several violent crimes and a victim of last weekend's Eaton Centre shooting.

They also say there's no evidence to indicate Nicholas Dillion-Jack had anything to do with the rampage that killed one and left seven others injured.

Police won't comment on reported ties between him and a 23-year-old man, who remains in critical condition with wounds from the mall shooting.

Police arrested Dillion-Jack early today as he slept at a motel in northeast Toronto after an earlier attempt to capture him failed.

On Thursday, the suspect managed to elude officers after a foot chase in the city, sparking a high alert at schools in the area.

Const. Tony Vella said police had been looking for Dillion-Jack for some time.

"They actually saw the man, and they chased after him but they lost him," Vella said.

"This man was considered armed and dangerous, and for the safety and well being of the community members, that's why the schools were placed in lock and secure."

The charges Dillion-Jack faces include aggravated assault, assault with a weapon, forcible confinement, careless use of a firearm, threatening death and robbery.

Police have previously said accused Eaton Centre shooter Christopher Husbands, the man he is accused of killing, and the man still in critical condition all belonged to the same street gang.

However, they also said they did not consider the mall shooting "gang-motivated" but rather the result of a "personal" dispute.