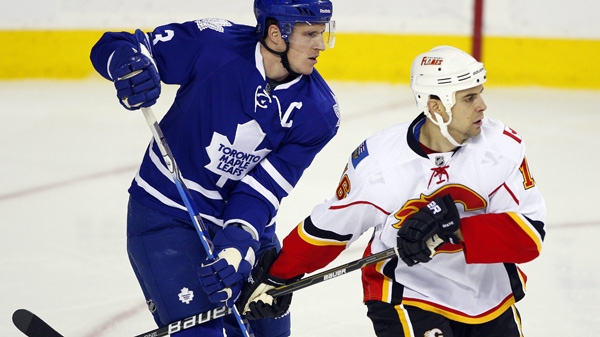 CALGARY - It took just under a minute for the Flames to spoil Dion Phaneuf's return to Calgary.

Olli Jokinen had a goal and two assists and the Flames scored three times in 57 seconds Thursday in downing the Toronto Maple Leafs 5-2.

Alex Kotalik, with his first of the season, Alex Tanguay, Rene Bourque and Niklas Hagman also scored for the Flames (14-15-3), who won back-to-back games for the first time since October. Miikka Kiprusoff stopped 17 shots for the win.

"It's been a long time since we won a couple of games in a row," Jokinen said. "The pattern the last 10 or 15 games is we play a good game and the next day, we don't show up.

"Our goal is to put ourselves in striking position before Christmas. We've got four more games to go."

The win moved the Flames ahead of Minnesota and into 13th place in the conference, four points out of a playoff spot, after the Wild lost 3-1 to Ottawa.

Nikolai Kulemin and Mikhail Grabovski scored for the Leafs (12-15-4). Jean-Sebastien Giguere gave up four goals on 24 shots and was replaced after two periods by Jonas Gustavsson, who made eight saves in the third.

Phaneuf, the Maple Leafs captain, played his first game at the Scotiabank Saddledome since the Flames traded him to Toronto in a multi-player deal Jan. 31.

His return, coupled with Toronto's only visit of the season, led to a feverish build-up. There were dozens of Maple Leaf jerseys in the Saddledome and fans started chanting "Go Leafs Go" before the players stepped on the ice for warmup.

But the two players still with Calgary from that trade had more of an impact as Hagman had a goal and an assist and Matt Stajan contributed an assist.

"It's obviously nice beating the blue and white where I was for so long," said Stajan.

Added Hagman: "Obviously I wanted to win too. I wanted to play well against my old team and show them that I can still play."

Phaneuf was greeted jeers and a few cheers when he touched the puck on his opening shifts, but it was a strangely quiet game from a player known for his punishing checks and laser shots from the point.

The 25-year-old attended his grandmother's funeral in P.E.I. on Wednesday and arrived in Calgary later that night. Phaneuf tripped Jarome Iginla on a breakaway with less than two minutes left in the game but Gustavsson stopped the Flames captain on the ensuing penalty shot.

"It's not ideal to have to attend a funeral. It wasn't a great day yesterday, by any means," Phaneuf said. "It's tough, it's emotional to go to those things, but it was a good celebration of her life and I'm glad I got to it and I have no regrets of going whatsoever."

Tanguay started Calgary's deluge at 15:17 of the second, beating Giguere glove side on Stajan's feed from the end boards for a 2-1 lead.

Then with Grabovski serving a minor for tripping, Jokinen continued the onslaught with a slapshot from the top of the faceoff circle at 15:50.

Jokinen followed that up by shovelling the puck up to Bourque in the neutral zone and once the winger gained the offensive zone, he unleashed a shot to beat Giguere's glove at 16:14 for a 4-1 lead.

Hagman scored the second of Calgary's power-play goals at 2:30 of the third to make it 5-1.

Grabovski added Toronto's second goal at 8:45 of the third. His slapshot from two strides over the blue-line beat Kiprusoff over the left shoulder.

Kulemin opened the scoring for Toronto at 6:16 of the first, beating Kiprusoff with a wrist shot from close range off a broken play.

Calgary tied it up less than a minute later when Kotalik's backhand shot from the right faceoff circle deflected off Giguere's inside pad and over the goal-line. Kotalik was playing his sixth game of the season after missing 26 with a knee injury.

"They finished their scoring chances and we weren't very good for two periods," Toronto head coach Ron Wilson said. "We had one line that got the job done tonight and that was Grabovski's.

"They beat us in races to pretty much every puck -- in our zone and their zone too."

Stajan, who turns 27 next week, was the key player in the Phaneuf deal for Calgary. The start of his season was delayed by a shoulder injury and he has only one goal in 26 games. He was a healthy scratch in two games before Thursday.

"I probably could have scored a couple of goals on my chances," Stajan said. "A 5-2 win, I think we almost doubled them in shots. That's the way we need to play.

"We went back-to-back finally. We can start climbing now. It's a big confidence boost for our team."

Notes: Calgary sent Phaneuf, forward Fredrik Sjostrum and defenceman Keith Aulie to Toronto for Stajan, Hagman, forward Jamal Mayers and defenceman Ian White. White was dealt to Carolina in November and Mayers signed with Tampa Bay in the off-season. ... With his assist on Tanguay's goal, Iginla extended his point streak to nine games (five goals, seven assists). ... Calgary's three-goal burst was the seventh-fastest in franchise history. ... The Flames went 2-0 versus the Leafs last season. ... Toronto hosts Calgary on Jan. 15. ... Calgary hosts Minnesota on Saturday before heading out on a three-game road trip against the Wild, Columbus Blue Jackets and Dallas Stars. Toronto wraps up its western swing Saturday in Vancouver.