Ontario hospitals 'not in a crisis' minister says, despite 100% increase in hospitalizations 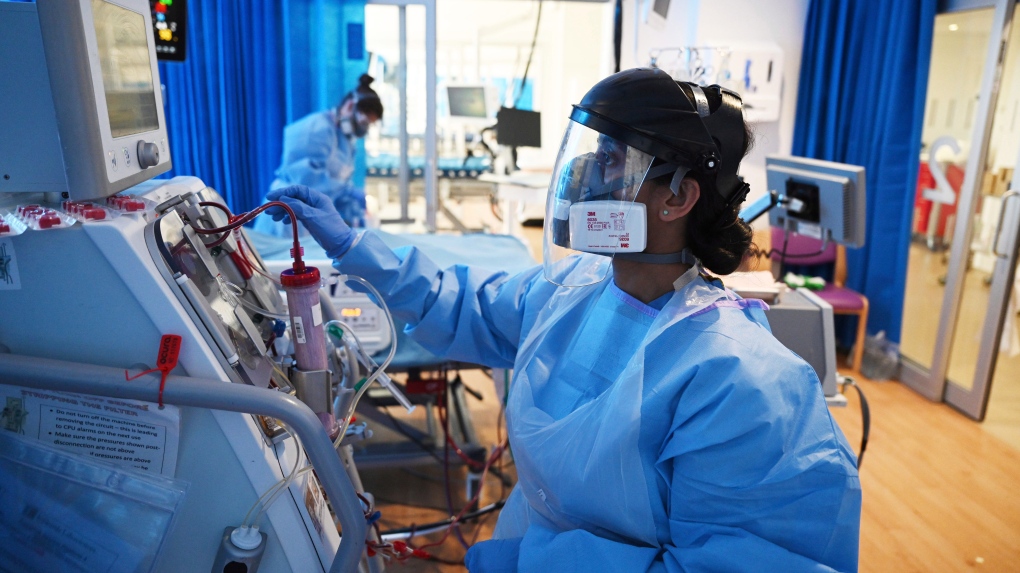 A member of the clinical staff wearing Personal Protective Equipment PPE cares for a patient with coronavirus in the intensive care unit at the Royal Papworth Hospital in Cambridge, England, Tuesday May 5, 2020. (Neil Hall / Pool via AP)

TORONTO -- Ontario's health minister is coming under fire after comparing the province's COVID-19 response to that of Alberta, suggesting that Ontario hospitals are faring much better than other Canadian jurisdictions as a result.

During Question Period on Wednesday, Christine Elliott defended the Progressive Conservative government's handling of the pandemic by pointing to Alberta's controversial practice of doubling up patients in intensive care rooms as a way to manage the strain from COVID-19.

"You want to speak about who is in crisis? Have you taken a look at Alberta, where they’re doubling up patients in intensive care units? We’re not doing that in Ontario," the minister said in the legislature.

Over the past month, however, Ontario has experienced a 100 per cent increase in COVID-19 patients who require hospitalization. On Nov. 2, 328 novel coronavirus patients were admitted to hospitals in the province -- today that number stands at 656.

Intensive care units have also experienced a dramatic 144 per cent surge in COVID-19 patients over the same period -- going up from 75 patients on Nov. 2 to 183 patients on Dec 2.

The surge in cases has contributed to the cancellation of surgeries at the Grand River hospital in Kitchener, multiple outbreaks at hospitals in Scarborough and pleas from the Ontario Hospital Association to follow public health measures to reduce the spread of the virus.

"Ontario hospitals are finding it increasingly difficult to maintain access to vital surgeries and procedures with COVID-19 cases rising," the association warned on social media. "Hospitals are doing everything they can, but they need your support."

While Elliott acknowledged that Scarborough General Hospital and the William Osler Health System is having a "difficult time" keeping up with the fight against COVID-19, she still maintained that "Ontario is not in a crisis right now."

"We have built capacity purposely, knowing that we were going to have an increase in the number of COVID cases in the fall, as well as trying to keep those other surgeries and procedures going," Elliott said.

"Just saying that oh we're better off in one province because they were doing worse, simply is just, I think very insensitive and really doesn't bode well for those families," Singh told reporters at Queen's Park.

Liberal MPP John Fraser said the government constantly compares itself to other juristictions -- such as the United States -- in an attempt to defend its response to the pandemic.