TORONTO -- Ontario's Progressive Conservative government says a "computer glitch" led to parents receiving overpayments, underpayments, or no payments at all, as part of a school strike rebate program.

Thousands of parents across the province received direct deposits this week from the Support For Parents initiative – a compensation plan for families of elementary-aged children affected by province-wide rotating strikes.

However, parents immediately began highlighting payment issues, including some who had received more money than they were owed by the government and others who haven’t received a cent.

Marie Fuentes is a parent of two children eligible to receive payments after being affected by a one-day strike in Toronto.

Fuentes told CTV News Toronto she estimates that she was supposed to receive $25 for her youngest child and $40 for her older daughter who has special needs. 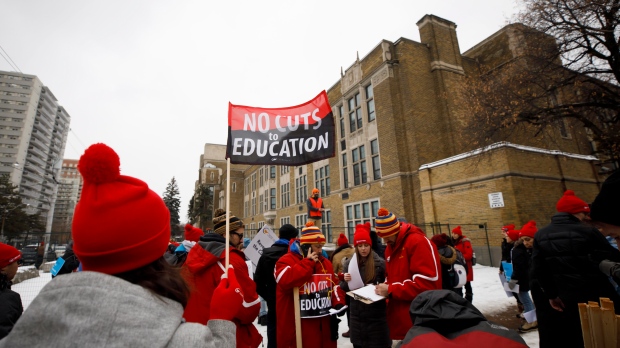 Instead, a direct deposit of $100 was made to her account on Feb. 4 from the government’s Support for Parents program for a single child, while she has yet to receive a payment for the second child.

The Ministry of Education blames a software issue which accidentally double counted the number of days schools have been closed due to strikes and included secondary school closures, which are not covered by the payment program.

"We will continue to review our systems to ensure all parents receive support during this period of disruption," the ministry said in a statement to CTV News Toronto on Thursday.

The ministry says the issue has been rectified and has set up a helpline for parents who believe they have any payment discrepancies.