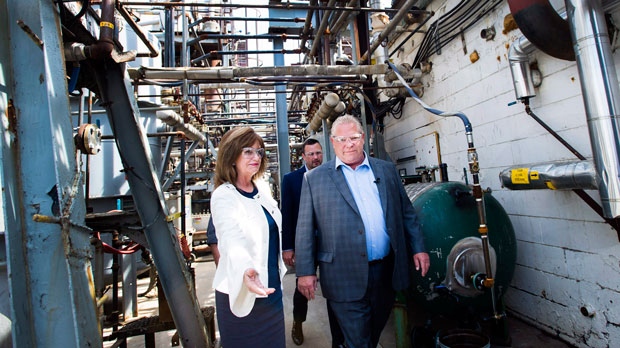 Ontario unions are bracing for maximum pain on minimum wage, as Premier-designate Doug Ford is set to roll back the $15 an hour rate.

The Ontario Federation of Labour, an umbrella group representing more than a dozen provincial labour groups, is warning of the impact that will have.

“People need to understand, a $15 an hour minimum wage, according to the new Premier of Ontario is not going to happen as of January.” said Chris Buckley, President of the OFL. “That’s a negative effect on 1.7-million workers."

Minimum wage was given a significant boost under Kathleen Wynne’s Liberal government, as the party tried to eat into NDP support before the June 7 election.

While wages were supposed to increase to $15 an hour on Jan. 1, 2019, the Progressive Conservatives, under then-leader Patrick Brown, signaled their intent to delay its full implementation until 2022. Brown promised a 25-cent increase per year for four years.

After Brown’s resignation and Ford’s ascension to the leadership, plans for minimum wage soon disappeared and were replaced instead with a pledge to erase the provincial income tax for minimum wage earners.

Ford’s platform, called a Plan for the People, promised to spend $558 million a year to give minimum wage workers a tax credit, which the OFL says isn’t the same as lift in income.

“That’s a bit of a false hope.” Said Buckley. “I would bet workers would much rather have that increase in their paycheque they can live on and they can spend.”

Buckley requested a meeting with Ford on the very night the PC party was given a majority mandate. He says he hasn’t received a response but is willing to wait until Ford is sworn in on June 29th to make another request.

Meanwhile, advocacy group Fight for $15 and Fairness is staging a rally on the lawn of Queen’s Park this Saturday to demand that the increase go ahead as planned.

Buckley says he will be there as well.

“Workers and activists need to come together and send the Premier of Ontario a strong message. They want their dollar an hour increase as of January.”

Correction: The advocacy group Fight for $15 and Fairness was incorrectly identified as Fairness and 15 in a previous version of this article. CTV News Toronto regrets the error.