TORONTO -- Ontario Premier Doug Ford has said that any individuals or companies found guilty of price gouging amid the COVID-19 pandemic will face “staggering fines.”

Speaking to reporters from Queen’s Park on Saturday, Ford announced that his government has issued an emergency order to prevent retailers or individuals from charging what he called unfair prices for necessary goods.

"If you are out there trying to price gouge and take advantage of this situation, trying to take advantage of the most vulnerable right now, buying cases of essential goods, hiking the price and selling it back to people who really need it, then stop, stop right now because it’s un-Canadian, it’s wrong and today we are putting an end to it," Ford said.

We’re coming down hard on price gougers. If you see anyone taking advantage by jacking up prices on essential items, we want to hear about it. https://t.co/9OyZprvG7I pic.twitter.com/AJqF0c1jbJ

Under the new order, a corporation could face a fine of up to $10 million for price gouging.

“If you’re selling face masks, gloves, cold medicine, hand sanitizer or disinfecting wipes and you’re hiking the price five or ten times than it should be, then you’re done, you’re gone,” Ford said.

“Because we’re coming after you.”

Ford did not specify how much of a price increase would constitute price gouging, but said it was something any Ontarian shopper would be able to recognize.

“When you’re finding that little (hand sanitizer) jug that’s typically sold for $5 being sold for $30, or hand wipes that sell for five, six or seven bucks, going for $30, that’s gouging,” he said. 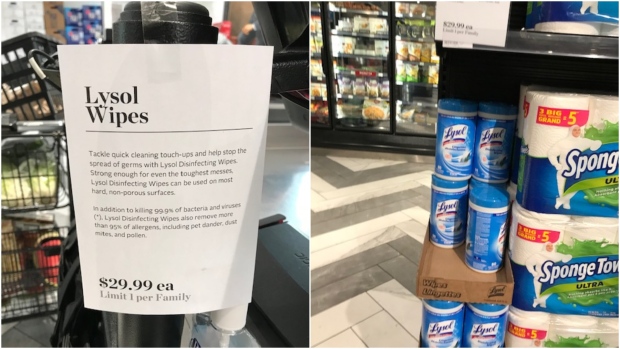 The premier was referring to an incident at Toronto grocer Pusateri’s, who advertised Lysol wipes for $30 apiece. Earlier in the week Ford said the price tag was "disgusting" and promised to take action.

Pusateri's has since apologized and promised to issue full refunds to customers.

Ford asked anyone who witnesses price gouging to call Consumer Protection Ontario at 1-800-889-9768.The phone line will be open on Monday.