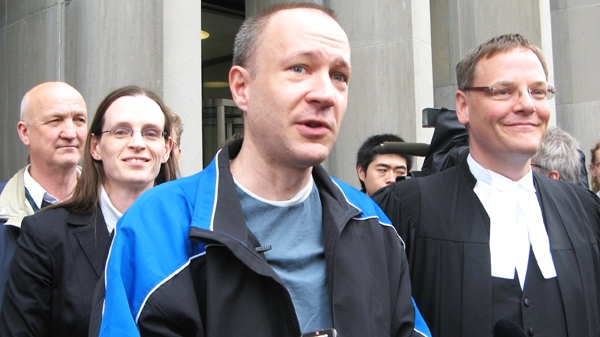 Byron Sonne talks to media outside court in Toronto, Wednesday, May 18, 2011. (Pat Hewitt / THE CANADIAN PRESS)

TORONTO - The trial of a man charged with possessing explosives just before last year's violence-marred G20 summit began Monday with lawyers arguing over whether police violated his rights.

Byron Sonne, whose 11 months in detention was longer than any of the other 1,000-plus people arrested in connection with the June 2010 summit, said he was relieved the trial was finally getting under way.

"We'll see how it goes," Sonne said as he entered the courthouse.

"It should be some pretty juicy stuff."

Sonne, 39, of Toronto, declined to say if he would be taking the stand.

His defence team maintains police violated his rights by detaining him unlawfully, and misleading the court when they obtained a search warrant.

The defence also argues that he was questioned for 12 hours without having access to a lawyer.

The self-described security geek was arrested on a bus June 22, 2010, just days before the start of the summit, which garnered international headlines for protester violence and mass arrests.

Supporters say Sonne had made it widely known beforehand that he was trying to expose flaws in the security measures, which cost taxpayers hundreds of millions of dollars.

With his parents and supporters on hand, court saw a video taken from a police cruiser a week before his arrest when officers, acting on an alert, stopped Sonne as he took video in downtown Toronto.

The video shows three officers talking to Sonne, who at one point appears to hand over identification.

Di Luca said his client, as was his right, refused to identify himself when the officers asked.

He said he would only do so if he was being detained under the Terrorism Act, something the Crown said would have alarmed the officers.

The police then devised a "ruse" to obtain his ID by threatening to arrest him for jaywalking, court heard, and Sonne then appeared to identify himself.

Di Luca maintains the entire stop was an unlawful detention and the information police gleaned and used to obtain the search warrant should be discounted.

Prosecutor Steve Byrne conceded Sonne was detained unlawfully, but only after police threatened to arrest him for jaywalking.

Until that point, Sonne was free to walk away, Byrne said, and he and the officers were simply having a perfectly legal and friendly conversation.

On his third attempt at bail, Sonne was freed under onerous conditions in May and moved in with his parents Bue and Valerie Sonne in Burlington, Ont.

His artist wife Kristen Peterson was also arrested, although all charges against her were dropped and they have since split up.

Byrne disputed that information police obtained from Sonne during the stop was critical to the prosecution.

To justify the warrant that led to his arrest, police used Sonne's Twitter and Flickr postings, along with statements made when they stopped him downtown.

The defence argues none was sufficient to justify the search warrant.

Sonne's preliminary hearing and bail applications were covered by a sweeping publication ban and he said he was pleased the proceedings could now be published.

Five charges were dropped during the preliminary inquiry.

He also faces the somewhat obscure charge of counselling to commit an offence not committed, namely mischief.

The Internet security expert -- described by supporters as a strong proponent of civil rights -- was living in a $1-million home in Toronto when he was arrested.

The trial continues Tuesday and Spies said she would rule soon on the legality of the police stop.

The defence will also start arguing its position on the legality of the search warrant.