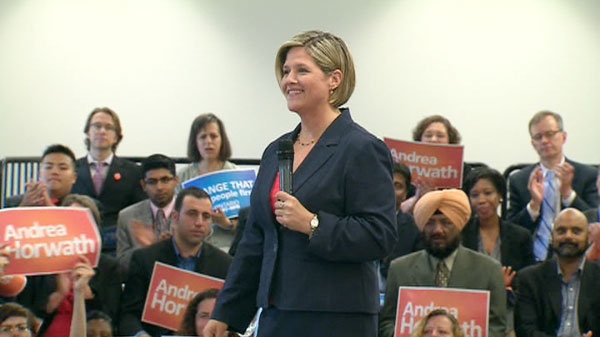 TORONTO - The Ontario Liberals have ramped up their campaign rhetoric with an attack on the NDP, calling Leader Andrea Horwath "the new Mike Harris."

While that's a tag usually reserved for current Tory Leader Tim Hudak, the province's environment minister said Wednesday's the NDP's take on poverty and the environment, as well as some of its energy policies, were so weak that they merited a comparison to the former PC premier.

"I'm still trying to come to grips about how Andrea Horwath can be the new Mike Harris of Ontario politics," Environment Minister John Wilkinson said during one of several news conferences to showcase the government's progress ahead of the Oct. 6 election.

"I remember when the NDP used to care about poverty issues and about the environment ... (but now) they've decided that good politics trump good policy."

The Liberals have spent months dubbing Hudak "Harris Lite," a reference they're fond of using to illustrate what they say will be cuts to health care and education under a Conservative government.

The government itself has announced a five per cent reduction in public sector jobs as part of its budget, and the Ontario Public Service Employees Union is expecting some of those layoff notices to come Thursday.

But Wilkinson described those cuts as the type of pruning that's part of a balance which "everyone agrees that we have to be."

"What we refuse to do is what previous governments did," he said.

"Both the PCs and the NDP engaged in slash-and-burn fiscal planning that didn't work."

New Democrat Peter Kormos welcomed the attacks as a sign of his party's strength in the polls.

"I think that's a strong indication of what their poll numbers say about who's on the ascendancy and who's suffering slippage," Kormos said.

"The characterization of Andrea Horwath as Mike Harris . . . it's not offensive, it's just silly. Nobody would ever, ever believe that."

The NDP, he noted, has promised to roll back corporate tax cuts and that will help fund public services.

Wilkinson also took another jab at Hudak, who was prominently featured this week in the Liberals' first attack ad.

The fiscal imbalances in the Tory platform, he said, put 12 government ministries at risk.

"Their platform as far as I can see . . . seems to lay out a very clear cost that there are ministries that they are going to eliminate," Wilkinson said.

Progressive Conservative Steve Clark dismissed the attacks, saying the Liberals were just "trying to paint Andrea and Tim into any corner that's going to stick."