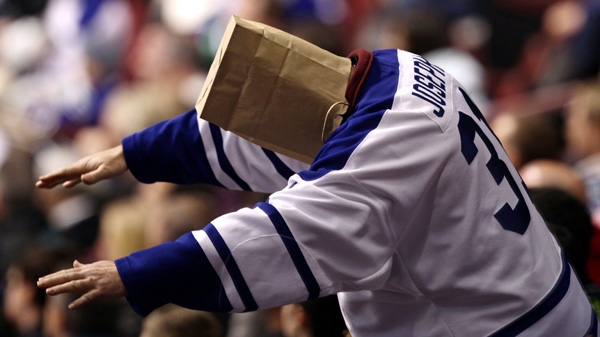 A Toronto Maple Leafs fan wears a paper bag on his head after the Vancouver Canucks scored their fourth goal against the Leafs during the third period of an NHL hockey game in Vancouver, B.C., on Saturday December 18, 2010. (THE CANADIAN PRESS/Darryl Dyck)

VANCOUVER - It took a goal by defenceman Christian Ehrhoff to finally beat the Toronto Maple Leafs on Saturday night but the Vancouver Canucks might have won the NHL game in the first period.

With the scored tied 0-0, and the Leafs pressing on a five-on-three power play midway through the opening period, Chris Versteeg found himself open in front of the net. He fired a point-blank shot that Canuck goaltender Roberto Luongo managed to stop with one of his pads.

Versteeg could only shake his head in frustration while the fans at Rogers Arena chanted "Lui, Lui."

That stop swung momentum to the Canucks, who went on to win 4-1.

"That's the save of the game and it kept us in it," said captain Henrik Sedin.

"It was one of those plays where the other team's top guys get confidence from scoring. He stopped them. If their offensive guys had scored, that's a big thing."

Making that stop was like adjusting the fine-tuning on Luongo. After that he was focused and saw the game clearly.

"It was good for me to have that early in the game," said Luongo, who made 27 saves and was named the game's first star. "It got me into it right away."

Ehrhoff sealed the win with just over five minutes left in the third. His slapshot from the point went through Toronto goaltender Jonas Gustavsson's legs, making the score 3-1.

Ehrhoff had just returned to the Canucks lineup after missing three games after being hit in the ear with a puck. He said it wasn't a petty win, but one Vancouver will take.

"It was a little sloppy at the beginning," said Ehrhoff, who has five goals this season. "It really doesn't matter in the end."

"He had been off for eight skating days," said Vigneault. "To come in and play the way he did tonight, you have to give him a lot of credit."

Jannik Hansen had a goal and assist for the Canucks, who are 8-1-1 in their last 10 games.

Alex Burrows and Henrik Sedin, into an empty net, also scored for the Canucks. Daniel Sedin had an assist to extend his point streak to 10 games, the second longest in the NHL.

Ryan Kesler had an assist on Hansen's goal, giving him eight points in five games.

It was Vancouver's eighth consecutive win over Toronto. The Leafs last beat the Canucks on Nov. 24, 2003.

Mikhail Grabovski scored the lone Leaf goal late in the third period to make the score 2-1.

His shot from the top of the faceoff circle went over the top of Luongo's glove. That gave the wilting Leafs some new life.

"I don't know if it glanced off our defenceman's stick or not," said Luongo. "If it didn't, I just probably blacked out for a second there."

In the first period Kessel made a nice move to free himself from two Canucks, then drilled a shot that Luongo blocked. Later Luongo stopped him on a backhand.

"I had some chances to score goals and I've got to bury them," said Kessel.

"If I score one or two of those, it's a different game."

The Leafs held their own with Vancouver most of the night, but couldn't beat Luongo.

"I thought we played well and probably didn't get enough shots through and not enough traffic," said coach Ron Wilson.

"At the end of the day only one line scored again. The guys have got to do what they're paid to do, which is score some goals."

The Leafs ended a three-game Western swing with their second consecutive loss. Toronto's record fell to 12-16-4 for 28 points.

With Toronto in town there were plenty of Maple Leaf jerseys sprinkled among the sellout crowd of 18,860. The attempts by Leaf fans to cheer their team were quickly drowned out by chants from the Canuck faithful.

Burrows opened the scoring with just 67 seconds left in the first period. Kevin Bieksa's shot from the point hit Toronto defenceman Carl Gunnarsson. Burrows corralled the loose puck and steered it past Gustavsson.

Left-winger Jeff Tambellini did a lot of the work on Hansen's goal in the second period.

Tambellini scooped up a loose puck, then drove down the boards. He passed to Kesler, who relayed the puck to Hansen, who then beat Gustavsson.

The goal came after Toronto had killed four minutes in penalties assessed to Versteeg.

Gustavsson made 25 saves on 28 shots.

Notes: Forward Aaron Volpatti played his first NHL game. ...The Canucks play their next three games on the road, facing St. Louis on Monday, Detroit on Wednesday and Columbus on Thursday.