Hamilton police arrest six people, seize $1M worth of drugs that were packaged for 'immediate sale' 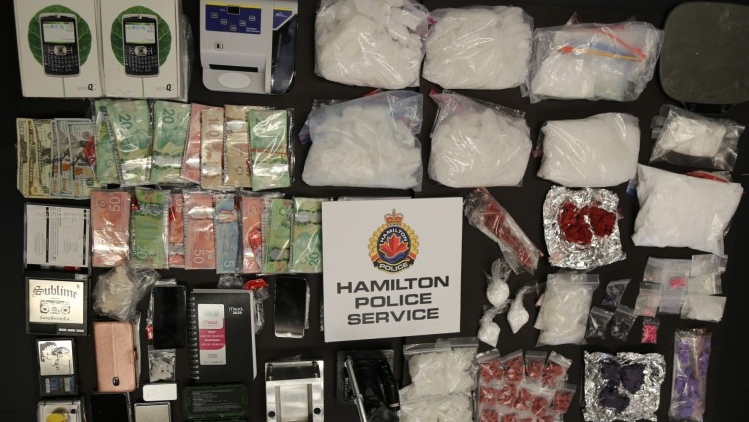 Drugs and other property that were seized as part of a recent investigation in Hamilton are shown. (Hamilton Police Service)

Hamilton police have arrested six people and have prevented $1 million of drugs packaged for “immediate sale” from ending up on the streets.

The seizure, which police say is among the largest in Hamilton history, marked the culmination of a weeks-long investigation.

In a news release, Hamilton police say that members of their vice and drug unit began an investigation into a residence near Kenilworth Avenue North and Cannon Street East earlier this month.

During the course of that investigation, police say that they obtained information which “confirmed the trafficking of illicit drugs.”

Four adults and one youth were arrested during the execution of the search warrants. A sixth individual was then taken into custody later that night.

Police say that the “investigation represents one of the largest seizures of Crystal Meth, Heroin and Fentanyl” in Hamilton’s history.

“The total weight of drugs seized exceeds five kilograms with most being packaged for immediate sale,” police said in the press release.

The suspects are facing dozens of combined charges, including possession for the purpose of trafficking and possession of the proceeds of crime over $5,000.

They have been identified as Khizar Ali, 33, of Toronto, Jody Leitch, 38, of Hamilton, Daniel Holland, 37, of Hamilton, Muhammad Saki, 22, of Pickering, Ashley MacDonald, 33, of Hamilton. The underage suspect, a 17-year-old female, cannot be identified under the terms of the Youth criminal Justice Act.