The father of eight-year-old Ashlynn Jolicoeur says the fact that his daughter is the only girl on the first-place Whitby Chiefs Senior Rookie baseball team “doesn’t faze her.”

Jolicoeur became an Internet sensation after tens of thousands of people liked a video on Twitter posted by the American non-profit “Baseball For All.”

The tweet included a video that shows the baseball star running and diving for the ball. In the caption, it said “Ashlynn, 7, was told that ‘girls shouldn’t be playing baseball.”

Ashlynn, 7, was told that “girls shouldn’t be playing baseball.”

Jolicoeur’s parents say another parent made the offensive comment last summer after Jolicoeur was awarded the MVP award at a playoff tournament. But they say the comment hasn’t thrown their daughter off her game.

“You know, it doesn’t faze her, and all the boys on her team treat her like any other teammate. Same with the coaches – she’s treated great,” said her father, Dan Therrien. “I just love watching her play.”

Jolicoeur’s coach said that her effort level and passion for baseball is “off the charts.”

“There’s nobody better that I’ve seen at this age group,” he said.

At the end of the month, Jolicoeur will play at Baseball For All National Girls Baseball Tournament in Rockford, Ilinois. About 350 kids and teens between the ages of seven and 18 will take part in the event.

Therrien said that Jolicoeur has loved baseball since she was a baby. She has three older siblings, who are heavily involved in the sport, and practices or plays 15 to 20 hours a week.

“We have videos of her as young as one swinging a bat,” said Therrien.

It’s no surprise that Jolicoeur already knows what she wants to do when she grows up.

“I want to be on team Canada when I'm older.” 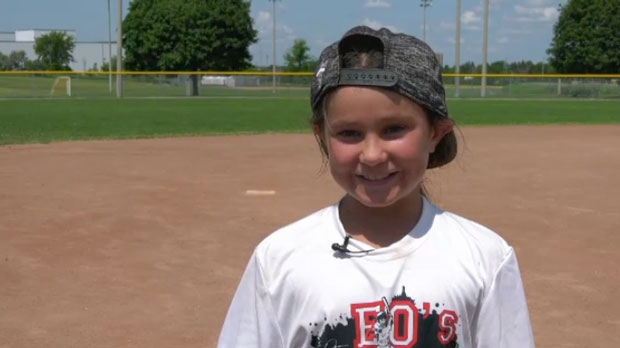 Ashlynn Jolicoeur is seen after baseball practice on July 23, 2019.