Canadian filmmaker Denis Villeneuve on his intimate relationship with 'Dune' 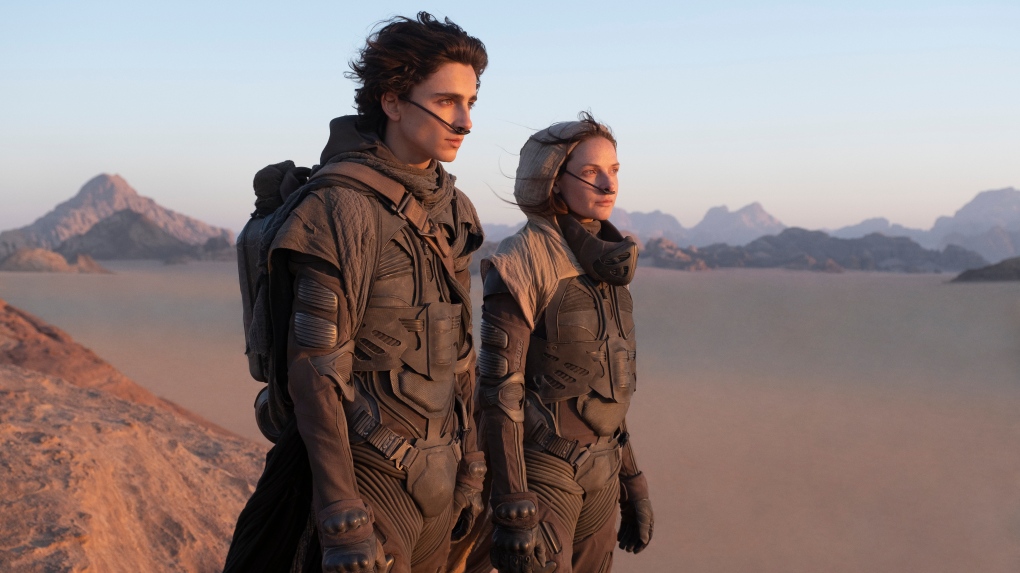 This image released by Warner Bros. Entertainment shows Timothee Chalamet, left, and Rebecca Ferguson in a scene from the upcoming 2021 film "Dune." Warner Bos. Pictures on Thursday announced that all of its 2021 film slate will stream on HBO Max at the same time they play in theaters. (Chia Bella James/Warner Bros. Entertainment via AP)
TORONTO -

For Canadian filmmaker Denis Villeneuve, his sprawling adaptation "Dune" is more than a personal and professional accomplishment -- it's part of his identity.

The Montreal writer-director says the 1965 novel that spawned the feature was a seminal part of his teenage years, when he devoured European sci-fi comics, discovered cinema and dreamt of making films about worlds beyond ours.

The epic interstellar story of warring families and a young antihero lingered in the back of his mind ever since, and now his vision of author Frank Herbert's tale hits the biggest of screens Saturday as a world exclusive IMAX special event at the Toronto International Film Festival.

"I like when projects have deep roots inside me, and 'Dune' has the deepest," Villeneuve, 53, said in a recent video interview from Montreal.

"I read this book decades ago, so it's something that, through the years, I kept being fascinated by this world, where I was feeling it was more and more relevant."

It wasn't until a few years ago that Villeneuve felt ready to take on the sweeping fantasy, which stars Timothee Chalamet as protagonist Paul Atreides, who is seen as the "chosen one" to save colonized planets. Rebecca Ferguson stars as his mother and Oscar Isaac plays his father, who accepts stewardship of a dangerous desert planet that holds "spice," the most valuable item in the universe.

Other cast members include Josh Brolin and Jason Momoa as allies of House Atreides, Stellan Skarsg├Ñrd as their enemy, and Javier Bardem and Zendaya as members of the Fremen tribe on planet Arrakis.

Many main cast members, including Chalamet, aren't on TIFF's list of expected in-person attendees. But Villeneuve and Ferguson are slated to be at the festival, which runs Thursday through Sept. 18.

"It's not a project that I would try to do 10 years ago," said Villeneuve, who directed, co-produced and co-wrote the "Dune" screenplay with Jon Spaihts and Eric Roth.

"I was ready now to do it because of the amount of technical knowledge."

His visionary work -- which also includes "Maelstr├╢m," "Polytechnique," "Prisoners," "Enemy" and "Sicario" -- will be recognized with a TIFF Ebert Director Award during the festival's Tribute Awards broadcast Sept. 18 on CTV.

Villeneuve said he has "a much more intimate relationship" with "Dune" than many of his previous films.

"It's my identity," he said. "I was able, for the first time, to express a part of myself that I didn't write from before, which is this relationship with the guy who was dreaming years ago about sci-fi."

The labyrinthine plot is famously difficult to adapt for the big screen, as evidenced by David Lynch's panned 1984 feature and the 2013 documentary "Jodorowsky's Dune," about Alejandro Jodorowsky's unsuccessful attempt.

Villeneuve's strategy was to split the story in half, with the new film serving as part one.

Villeneuve and Fraser shot the film specifically for the IMAX format so it would be seen on the biggest screen possible.

The star-studded saga had its world premiere last Friday at the Venice Film Festival, where many critics praised its grandeur and striking special effects but some said it lacks emotional heft.

Villeneuve said "Dune" part two is being written and he knows exactly what to do with the story.

But its future depends on how well this film does at the box office, which is something he agreed to from the beginning.

"I think that was the best way to do it, because I would not have been able to do both movies at the same time," he said. "The amount of work, the complexity of the storytelling there, I think that I was protected in some ways by this early decision of making part one first. It gave me distance.

"I learned so much doing this movie, it's crazy. I never learned about filmmaking like that. It was like going back to Cinema 101. So it was a blessing to focus on this first part. And if everything goes well, we cross our fingers, then I would like the chance to do the second part."

The box-office prospects are complicated by Warner Bros.' decision to put "Dune" on the HBO Max streaming service in the United States the same day it hits theatres Oct. 22. In Canada, audiences will only be able to watch the film in theatres when it lands across the country Oct. 22.

Echoing his criticism of the HBO Max deal last December, Villeneuve acknowledged the world is in a difficult battle with the pandemic but said he felt it "important to celebrate the big screen."

"The big screen experience is part of the cinema experience: people are committed, engaged with what they are seeing when they are sitting in a theatre with their full attention. It's like a ceremony with the theatre.

This report by The Canadian Press was first published Sept. 7, 2021.

A hand surgeon testified Monday that Johnny Depp could not have lost the tip of his middle finger the way he told jurors it happened in his civil lawsuit against ex-wife Amber Heard.