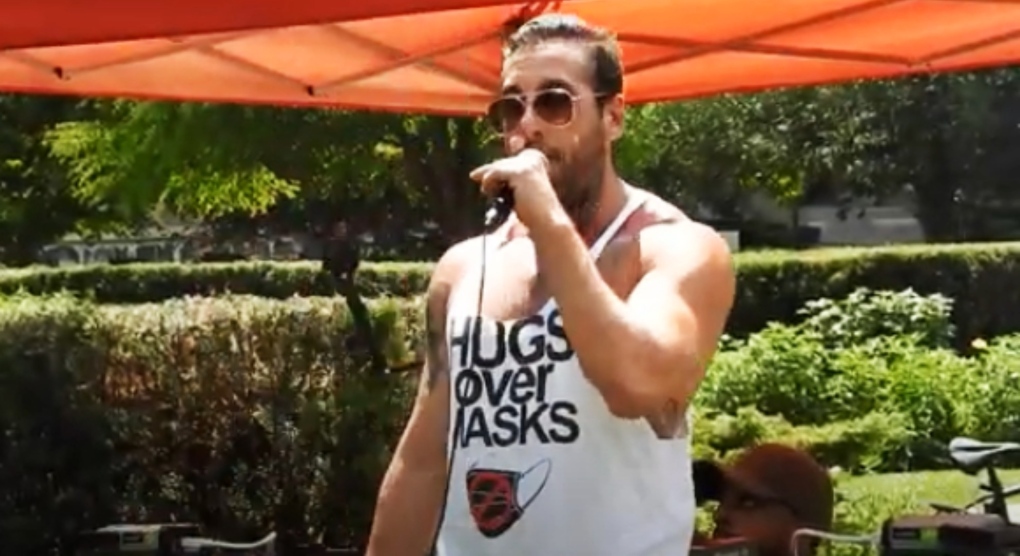 TORONTO -- Raucous anti-masker Chris “Sky” Saccoccia allegedly threatened to kill Ontario Premier Doug Ford, a peer in his anti-lockdown movement as well as all of Canada’s premiers earlier this month, and then drove a vehicle at a police officer who tried to arrest him.

According to court documents obtained by CTV News Toronto, Saccoccia allegedly told a man named Rob Carbone, leader of the self-styled “Republican Party of Canada,” that he wished to kill Carbone, Ford and all of the premiers in Canada, on or about May 12.

One week later, a Toronto police constable went to find Saccoccia in York Region, when the 37-year-allegedly drove a car at the constable in an attempt to flee.

He turned himself in to Toronto police on May 20.

He was charged with three counts of uttering death threats, one count of assaulting a peace officer with a weapon, and one count of dangerous operation of a conveyance.

None of the allegations against him have been tested in court.

Ontario Premier Doug Ford's office said they would not comment on the allegations against Saccoccia, as it is an ongoing criminal proceeding.

Saccoccia was released on bail and agreed to reside with a surety in Markham and will next appear in court at College Park on July 8 at 10 a.m.

Under the terms of his bail, Saccoccia cannot contact Ford or Carbone and cannot come within 500 metres of any address associated to them.

He must reside with his surety and cannot drive a vehicle or possess any weapon as defined by the Criminal Code.

Saccocia has travelled the country decrying lockdown measures against COVID-19, falsely claiming Ontario’s hospitals do not have hundreds of coronavirus patients in them, and filming his encounters with police during demonstrations, including his return to Canada through Pearson Airport where he was fined for declining to submit to hotel quarantine.

He was arrested in April at a rally against lockdowns in Thunder Bay.