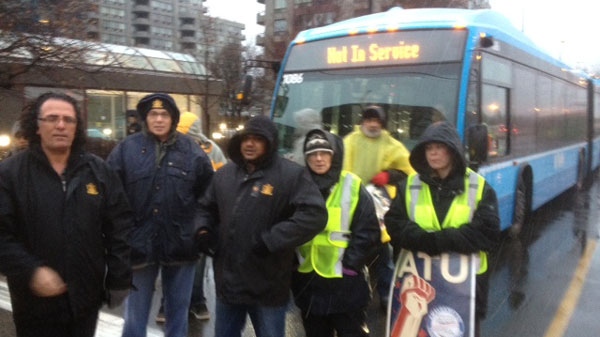 York Region is taking matters into its own hands to move commuters as a lengthy transit strike stretches into its third month.

The region north of Toronto said Thursday that it planned to begin using 18-metre buses along its key Yonge Street between Richmond Hill and the Finch GO Bus Terminal. This replaces the existing 12-metre YRT buses currently in operation.

It also vowed to "explore every means possible to restore and maximize service to residents."

The region, which has vowed since the start of the strike not to intervene, has become frustrated by the lack of talks between the unions and the contractors.

"The unions and contractors have had ample time to negotiate a fair agreement," Chairman Bill Fisch said in a release. "We are taking measures to restore as much service as possible, placing our riders at the forefront by putting larger buses in service, getting our commuters out of the cold and where they need to go."

The transit workers are striking against the bus operators Miller Transit, First Canada and York BRT Services, which is more commonly known as Veolia Transportation.

Earlier on Thursday, striking York Region Transit workers blocked buses at the Finch bus terminal following reports that the vehicles were being operated by non-unionized workers.

Picketers targeted VIVA buses at the terminal, a commuter bus station that serves York Region Transit and GO Transit buses. As a result, GO Transit stopped servicing the station at the height of the Thursday morning rush hour.

Workers completely surrounded one bus, blocking other buses from arriving or departing. They refused to disperse despite a court ruling that said they could only delay buses by a maximum of three minutes. Strikers said they don't believe that ruling applies to this instance.

Finch terminal is located one block north of the intersection of Finch Avenue and Yonge Street, and is connected to the Finch TTC station by a tunnel.

The picket is the latest in the lengthy transit strike, which is now in its 12th week. The dispute has centred on pay and benefits.

"The result of the vote on Miller Transit's offer is a clear indication that the unions are not interested in returning to work," said Fisch.

Fisch said the region will stick to its promise of not requesting back-to-work legislation or support arbitration, but will also not "stand by and watch our riders continue to suffer due to the lack of regard the parties involved have for our transit-dependent residents."