Week 3 Map: Battling for votes in the GTA 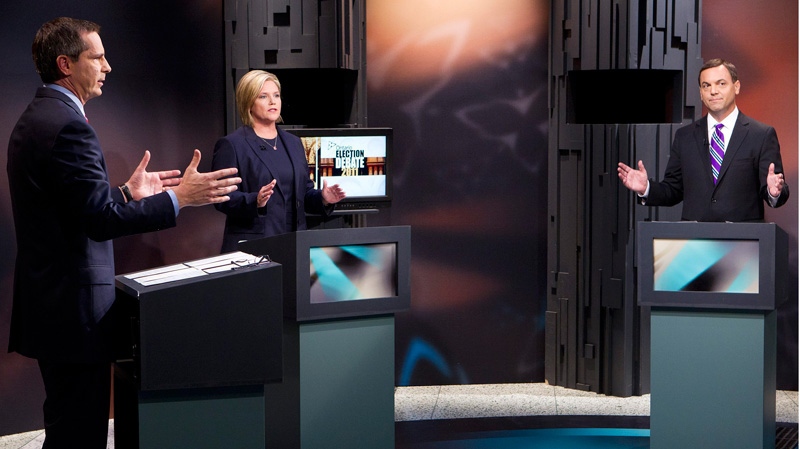 Ontario's three main political leaders shared a stage for the televised leaders' debate on Tuesday night, but their buses must have just kept missing each other during the campaign's third week.

Most campaign appearances were clustered in Toronto and the GTA, along with Hamilton and cities in southwest Ontario.

Here's a breakdown of where the three spent their time between Sept. 21-27 as the campaign counts down to the Oct. 6 vote. The large-format map has a timeline.

On Sept. 21 he made stops to tout job creation in Belleville and his government's Healthy Homes Tax Credit in Georgetown before ending the day with a speech in Toronto. His party released an open letter saying it wasn't registering any tax hikes as per the Taxpayers Protection Act of 1999, but accused the Tories of planning to download costs onto municipal taxpayers.

McGuinty used Sept. 22 to tout his government's investment in hospitals and to warn a business audience that a vote for the Tories or NDP would set the province's economy back.

He spent that day in Oakville and Toronto. Oakville is a riding currently held provincially by the Liberals that went solidly Tory in the spring federal vote.

McGuinty started Sept. 23, the day of the northern debate in Thunder Bay, by making an announcement in Toronto about investing in mental health for youth before going on to stops in Hamilton and Kitchener.

The Hamilton announcement about expanding GO Train service was made in Hamilton Centre, Horwath's riding. It was McGuinty's first Hammertown stop of the campaign.

Kitchener Centre is currently held provincially by the Liberals, but the federal Tories deposed Liberal incumbent MP Karen Redman in May.

After spending Sept. 24 off the campaign trail, McGuinty made three appearances in Toronto on Sept. 25-27 before the debate.

While he didn't make a stop in Mississauga, the Sept. 24 news that the Liberals would relocate a gas-fired electricity generating station from Mississauga would dog McGuinty for the next few days.

In this past week, McGuinty had six stops in Toronto. He had five stops elsewhere in the province.

The Progressive Conservative leader started the third week in Brampton, where he pledged not to raise taxes, as per the Taxpayer Protection Act of 1999.

Brampton-Springdale has been Liberal since 2003, but a Sept. 25 Toronto Star poll of the riding suggests it could turn to the Tories on Oct. 6. The federal Conservatives won there in the spring.

Hudak later made a stop at the offices of his Etobicoke North riding, the political home of Toronto's Mayor Rob Ford. Liberals have held the riding since 2003.

Sept. 22 saw Hudak make a media appearance in Toronto and stop at a candidate's office in Oakville, where he was confronted by an activist opposed to a quarry north of Orangeville. The federal Tories won in Oakville this spring.

The trip to Thunder Bay on Sept. 23 for the northern issues debate was Hudak's only northern jaunt so far this campaign.

After taking Sept. 24 off, Hudak made an appearance in Brantford on Sept. 25 to attack the McGuinty government on compensating victims of crime. He then voted in his own riding of Niagara West-Glanbrook.

Hudak stopped for a photo opportunity in Mississauga at a GO Train station on Sept. 26, as well as at a north Toronto autobody shop at day's end. His news-making event of the day was to tell an audience at Waterloo's Conestoga College that a Tory government would overhaul the province's apprenticeship program. He also promised to review industrial wind turbine operations.

The Tories have held the Kitchener-Waterloo seat since 1990, but one poll suggests the Liberals could be competitive there. Federally, the Tories knocked off incumbent Liberal MP Karen Redman in the spring.

Hudak made three stops in Toronto, three in the GTA, three in southwest Ontario and one in the north over the past week.

The NDP leader's main event of Sept. 21 was to use a backdrop of moms and babies to say her party would promote breastfeeding and create four birthing centres staffed by midwives.

Later, she would attend an all-candidates debate in her Hamilton Centre riding, where she's been MPP since 2004.

Horwath had only one event on Sept. 22. She went to Toronto's York West riding and visited a senior to illustrate her party's plans to improve home care.

Besides attending the northern issues debate in Thunder Bay, Horwath stopped over in Sudbury for a pub night and mainstreeting. She has spent the most time campaigning in the north of the three major leaders.

Horwath ventured out to Fort Erie on Sept. 24 to say her party would re-open emergency rooms in two Niagara-region hospitals.

A poll published Sept. 25 by the Toronto Star suggested that the Tories have a good chance of taking the Niagara Falls seat from the Liberals, with the NDP running third. The NDP did finish second there in the spring federal vote.

On Sept. 25, Horwath appeared in Toronto to release the cost of her party's platform. She didn't have any public appearances on Sept. 26.

Horwath made three appearances in Toronto, two in Sudbury, one in Thunder Bay and two in Niagara-Hamilton this past week.

The Toronto Star poll released on the weekend had the PCs and Liberals tied at 35 per cent each. Besides measuring the overall mood of the province, the poll sampled 400 voters in each riding. If the poll is reflective of election night, the PCs and Liberals would each win 47 seats in Ontario's 107-seat legislature. The NDP would pick up 13.

The margin of error for that sample size is plus or minus five percentage points.

With eight days of campaigning left after Tuesday's debate, there are still opportunities to move votes. Here are the closest races to watch, based on the Star's poll:

That makes at least 22 ridings where the outcome is very much up for grabs. Eleven of those seats are either in Toronto or the GTA.

Guess where the leaders will be spending the next eight days.