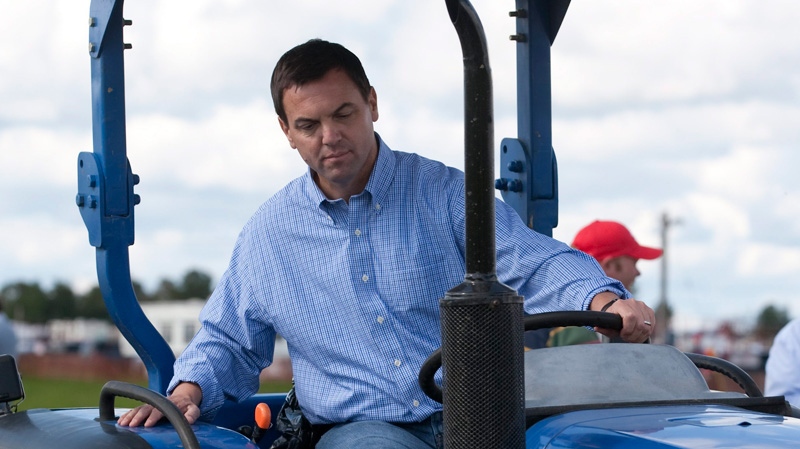 Outside of the election debate on Sept. 27, the only place you'll likely see all the main party leaders in one place at the same time is at the International Plowing Match.

On Tuesday, Liberal Leader Dalton McGuinty, Progressive Conservative Leader Tim Hudak and NDP Leader Andrea Horwath all showed up at the annual event, held this year in Chute-A-Blondeau in far eastern Ontario, not far from Hawkesbury.

Here's a breakdown of where the leaders spent the second week of the campaign as they work to gain support before the Oct. 6 provincial election. The map gives details (you can also see a larger version):

McGuinty travelled north to Thunder Bay, Sault Ste. Marie and Sudbury on Sept. 15, trying to link jobs in those areas to his government's clean energy and transit policies.

Thunder Bay-Atikokan is a riding the Liberals won by only 50 votes in 2007 -- and one that went NDP in the May 2 federal election.

McGuinty did say on Sept. 15, while in Sault Ste Marie, that he wouldn't be attending a northern issues debate on Sept. 23.

McGuinty then swung down to Windsor and Cambridge on Sept. 16 to push his jobs message.

He took some heat from the media that day for holding a photo op on Sept. 13 at Eclipsall Energy. Executives at the company said production had been halted due to slow demand, but McGuinty said in Windsor that he couldn't say if the assembly line was restarted for the cameras.

From Sept. 18 to 20, he pushed health care -- visiting Ottawa's Montfort hospital, another he said the Tories had tried to close.

On the evening of Sept. 20, he attended an event in Kingston -- an eastern Ontario city the Liberals have represented since 1995.

His three most-visited cities in the first two weeks of the campaign:

McGuinty made five other GTA stops.

He spent Sept. 14 in southwest Ontario, making stops in Leamington, Stratford and Guelph.

Hudak would come under fire for his Leamington event, where he talked about his sex-offender registry proposal. The town had a parent's group form to protest the housing of a sex offender at a local halfway house. Some members of the group said a number of individuals standing on stage with Hudak weren't part of their protest.

On Sept. 15, Hudak focused on York Region. A small group showed up at a Tory event in Markham to protest the use of the term "foreign workers."  It was used by Hudak when attacking a Liberal proposal to offer $10,000 tax credits to businesses who hire certain new Canadians.

He mainstreeted on Sept. 17 during the Ukrainian festival on Bloor Street West, an area held by the NDP.  On Sept. 18, he visited with small-business owners in Eglinton-Lawrence, a Toronto riding where the federal Tories knocked off veteran Liberal MP Joe Volpe.

Hudak pointed his “Change” bus east on Sept. 19, with stops in Trenton, Prescott and Cornwall. The federal Tories did very well in Trenton and Cornwall on May 2. Before doing so, he used an Etobicoke stop to say a Tory government would end smart-meter billing for hydro.

Of the three major leaders, Hudak is the only one who hasn't made a northern trip yet.

His three most-visited cities at this point in the campaign:

Hudak made three other GTA stops.

The NDP leader's travels took her from St. Thomas to Ottawa on Sept. 14. St. Thomas is in Elgin-Middlesex-London, where there is no incumbent. It has been hard-hit by auto plant closures, so Horwath talked about the NDP jobs plan there. Ottawa Centre is a federal NDP riding.

On Sept. 15, she campaigned in Toronto and Brampton. Toronto Centre -- location of Ryerson University, where Horwath made a tuition-freeze promise -- is where high-profile street nurse Cathy Crowe is running again for the NDP. The party finished a very strong second in Bramalea-Gore-Malton in the spring federal election to the Conservatives.

Horwath ventured north one day after Dalton McGuinty's trip. She revisited Thunder Bay-Atikokan, which promises to be a battleground as the Liberals only won by 50 votes in 2007. She also campaigned in Sault Ste Marie one day after McGuinty -- a riding the NDP have held in the past.

Her final stop was in North Bay, where there is no incumbent for the Nipissing riding. There, she promised to squelch a deal that would see GO trains refurbished in Quebec.

She would make more stops in the Nipissing riding on Sept. 17, going up to Temagami and New Liskeard.

Of the three major leaders, Horwath has spent the most time in northern Ontario to this point in the campaign.

A TTC subway station formed the backdrop for a Sept. 19 appearance in Toronto's Davenport riding, where Horwath said an NDP government would provide more public transit funding. There's no incumbent and the NDP won here federally in the spring.

Horwath ended the day in Ottawa Centre, her second visit there for the week.

After the plowing match on Sept. 20, Horwath made stops in Cornwall and Kingston, shadowing Hudak and McGuinty. Cornwall is in Stormont-Dundas-South Glengarry and has no incumbent. The Tories won handily in the spring federal election.

Horwath had to deal with a minor brushfire after an NDP candidate in Niagara-West-Glanbrook was found to have made some awkward comments about Nazis and religion.

Here are Horwath's three cities with the most appearances to this point in the campaign:

She also made four GTA stops.

Nanos Research didn't release a new poll during the second week of the campaign, but the race is considered to be a tight, two-way fight between the Tories and Liberals.

On Tuesday, Sept. 27, the leaders will hold their televised debate. No other campaign events are scheduled on that day.

After that event, there will only be eight campaigning days left before the Oct. 6 vote. Advance polls are now open and will stay that way until Sept. 30.

For that last eight-day push, keep an eye on the leaders' travel agendas. It will give clues as to where the most interesting battles will unfold on election night.

Leave a comment. If you have some interesting video or photos of the campaign, please consider submitting them to MyNews.