Emergency crews were called to Carlingview Drive and Constellation Court, near Dixon Road, around 4:15 p.m.

One vehicle was found at the scene flipped over against the side of a building while another hit a hydro pole, breaking it in half. 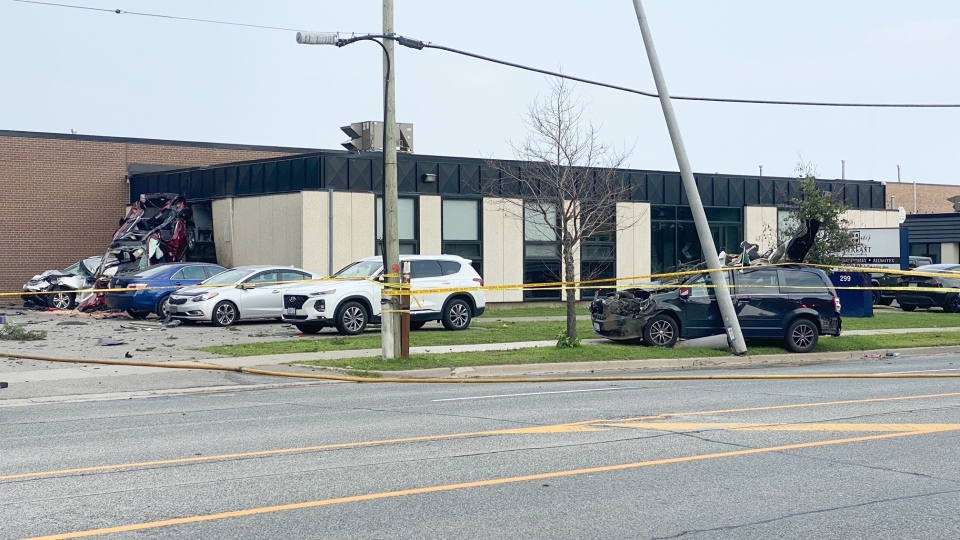 The force of the collision also dislodged a gas line and brought down hydro wires across the scene.

Three vehicles were involved in the collision, Toronto Fire said, and the building may have sustained structural damage. Police later said that all but one of the vehicles had been parked at the time of the collision.

“When our officers arrived on scene fire crews were trying to extricate two people from a car. Both of the people had very serious injuries,” Const. David Hopkinson told CP24.

One person was pronounced dead at the scene. A second victim was rushed to hospital where he later died of his injuries.

Investigators have not released the ages of the victim, saying only that the first victim was female and the second was male. Both were travelling in the same vehicle.

“When one of the cars had flipped it struck a building, and it also dislodged the gas line. So that created a gas leak in the area. We also had wires that were from the pole that were lying on top of the car so it offered quite a challenge to the fire crews who were trying to extricate these two people,” Hopkinson said.

He said speed may have been a factor in the collision.

The building was briefly evacuated because of the gas leak.

Roads in the area are expected to be closed for a few hours while police investigate the fatal collision.