Toronto getting $12.3 million from Ottawa to combat roots of gun violence

Toronto getting $12.3 million from Ottawa to combat roots of gun violence

Toronto will be getting a $12 million boost to help community groups on the ground tackle the root causes of gun violence in the city.

“This funding will support community-led projects to combat gang violence and activities among at-risk children, young people and young adults in Toronto and it will help address knowledge gaps around the impacts of interventions in gang violence,” Mendicino said. “It will also help to provide strategies that will off-ramp so that young people who are at risk make good choices, rather than some of the choices that can lead them down the wrong path.”

Toronto will be receiving up to $12.3 million from the federal government’s $250 million Building Safer Communities Fund. The fund provides municipalities with money which they are then able to distribute to local organizations that focus on children, youth and young adults who are involved in or at risk of joining gangs.

Mendicino said the fund uses data and evidence, including population and crime statistics, to determine where investments should be allocated.

“It's a very smart and targeted approach that will ensure that communities who are most at risk will receive the support in a timely manner to invest in the safety of their residents,” he said. 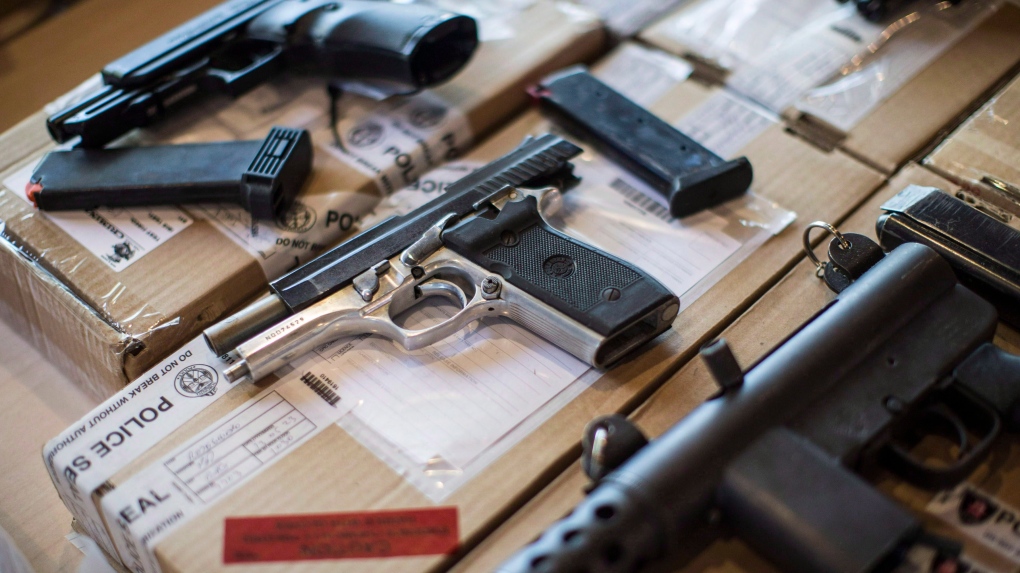 Police display guns seized during a series of raids at a press conference in Toronto on Friday, June 14, 2013. THE CANADIAN PRESS/Chris Young

The federal government previously announced in March that $7.3 million from the fund would be given to York Region for the same purpose and announcements are expected in other municipalities as well.

He acknowledged that there is “no one size fits all solution to gun crime and gang violence” and said cooperation with communities is key.

“That's why at the very heart of this announcement for $12.3 million has to be cooperation, has to be communication, has to be collaboration,” he said, standing alongside a number of organizations and individuals involved in helping youth avoid gangs.

Tory echoed that sentiment and said groups working with youth on the ground are key.

“When we combine our efforts together and put this new money to work and collaborate the way we have on housing, the way we continue to on housing the way we did in the pandemic, there's every reason to believe that it's going to make a material difference as long as we make sure that at the same time as we collaborate together, that that collaboration includes every minute of every day, the community leaders represented by those behind us today because they are people who know best,” Tory said.

He said gun violence not only hurts the immediate victims, but families and communities who remain traumatized by it.

The increasing prevalence of gun violence has been a growing concern in Toronto for the past number of years.

More recently the issue of guns has been in the minds of Canadians following a mass shooting at an elementary school in Uvalde, Texas on May 24 which left 19 children dead along with two teachers.

In the wake of the tragedy in the U.S., Ottawa announced Bill C21 on May 30. The bill would further restrict access to handguns across the countrya, implementing a freeze on the sale, transfer or purchase of handguns in Canada.