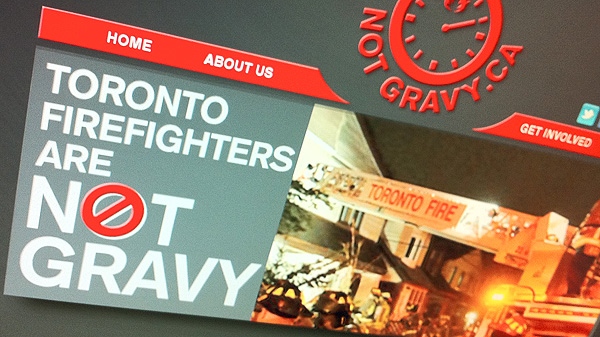 Toronto Fire Services are fighting back against Mayor Rob Ford's proposed budget cuts on their new site notgravy.com, but the city's budget chief insists there is no money "to shell out."

It's a tongue-in-cheek jab at Ford's mayoral campaign to "stop the gravy train" at City Hall.

Ford has mandated 10 per cent cuts across all city departments – including essential services such as fire, police and TTC – to offset the $774-million budget deficit.

Their current budget is $371 million, 92 per cent of which goes toward salaries and benefits. They say a 10 per cent cut would mean 400 fewer firefighters and the permanent removal of 20 trucks.

TPFFA president Ed Kennedy says the proposed city-wide cuts were "a mistake from the beginning."

Kennedy says he's confident the public will stand behind the firefighters.

"I think emergency services should be looked at another way," he said. "Everyone should be looking at efficiencies, but to order 10 per cent cuts? I like to look at Toronto as a safe city, I live here."

City Hall budget Chief Mike del Grande said every department needs to be part of the solution, which stems from the summer's KPMG reports that laid out potential cuts with a "low," "medium," or "high" potential for savings.

Del Grande said there will be a series of discussions between now and January to decide whether there will be cuts or adjustments made to fire services.

He has not looked at the notgravy.ca site, which was created by the union, and has not discussed it with Fire Chief Bill Stewart.

"Because they're emergency services, they've (fire services) all received free passes every time budget cuts come up," he said in a telephone interview.

He said there are still questions surrounding how many staff and how much machinery is needed, and how resources can be best utilized.

He said there are issues with pay structure within the department that need to be looked at.

"We have people that work in the stock room that have the rank of captain."