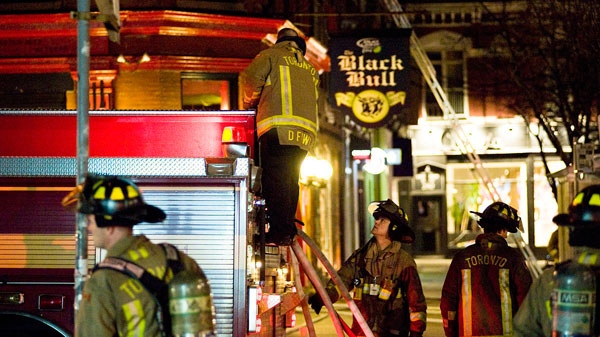 Toronto Fire Fighters are seen at the scene of a fire at the Black Bull Restaurant and Bar on Queen St. West and John Street in Toronto on Thursday, April 21, 2011. (Aaron Vincent Elkaim / THE CANADIAN PRESS)

Toronto firefighters could be next on the chopping block as the City of Toronto looks at cutting costs in any way possible.

Ed Kennedy, president of the Toronto Professional Firefighters Association, said Toronto Fires Services has been asked to reduce its budget by 10 per cent.

Kennedy said Chief Bill Stewart has warned the city's budget committee that the move would mean 400 firefighters would be laid off and more than 20 trucks would be taken off the road.

He said Toronto Fire is currently understaffed and can't afford to lose a single employee. He claims cutting the service further would put the public at risk.

The final decision on staffing levels will be made in September.

Word of the downsizing emerged as the city searched for ways to cut down on salaries as well as the cost of the services it provides.

The city is facing a shortfall of $774 million as it heads into its 2012 budget year. It is currently receiving a series of reports from consulting firm KPMG on what services could be reduced.

Earlier this week, the city announced it was offering a voluntary buyout program to both workers and management.

Up to 17,000 city employees are eligible for the buyout offer, which caps payment at six months' pay. The city hasn't been specific about how many departures are needed nor has it given a specific cost reduction target.

TTC workers, library staff and police are not eligible for the initiative, although the Toronto Police Services Board has offered buyouts to senior-ranking officers.

City officials have said that if the needed cost savings can't be achieved through buyouts, then layoffs will be used.

The head of Toronto's unionized outside workers told CTV Toronto he expects the city will lock the union out when its contract expires at the end of December.

"The writing is on the wall. We're already hearing rumours of lockouts at the corridors of City Hall and we're preparing for that eventuality," Mark Ferguson, president of CUPE Local 416, said on Wednesday.

A review of emergency services released on Wednesday suggests Toronto already had fewer deployed vehicles per capita than any other Ontario city.

The consulting firm did suggest merging Toronto's Emergency Medical Services and Fire Rescue and Response Services, as well as cutting down on the number of medical emergencies to which fire trucks are deployed.