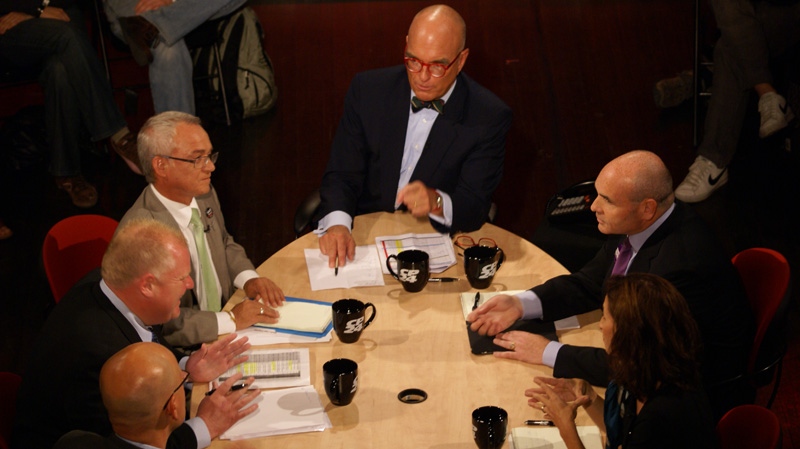 Here are the top 10 things that stood out in Tuesday night's mayoral debate, hosted by CP24.

Some of these moments were serious and refreshing and others were downright silly.

1. The candidates kept most of the mud-slinging to the first half. Talked earnestly about their plans and the issues in the second half.

Transportation, job creation, city spending and accountability – the "bread and butter" issues defined by voters in the newest CTV poll -- were all addressed.

Rob Ford and George Smitherman both said they will release their economic plan by the end of September. Oddly enough, Sarah Thomson barely went into detail about her new economic plan (titled TRANSFORM) even though she released it hours before the live debate began.

2. Ford thinks Toronto's motto should be "Open for Business" rather than "Diversity our Strength." He repeated again that Toronto can't support a million new people and that the city needs to take care of its current population first. He was criticized by his rivals who said diversity is one of our city's greatest strengths.

3. Ford vowed to get rid of Toronto's pesky bed bug problem when an audience member asked how he planned to improve the lives of people living in the city's impoverished Regent Park neighbourhood.

4. Though Smitherman admitted Ford had "captured the imagination of the people," he offered a less drastic approach to spending cuts at city hall than his main political rival. Ford has promised to slash salaries and benefits, cut staffing and get rid of the vehicle registration and land transfer taxes. Smitherman is offering to freeze salaries and taxes for at least a year and reduce the vehicle registration tax

5. Smitherman and Joe Pantalone were as quick to attack each other as they were Ford. Pantalone, who is in third place in the polls behind Smitherman, opened up the debate by saying he would take over Smitherman "any day now." Smitherman questioned Pantalone's vision for business, pointing out that he has dismissed recommendations made by the city's Board of Trade.

6.There is not enough public interest in municipal politics. Members of the audience asked informative questions but we can't forget the random people on the street that fumbled the answer to the question: "Do you know the candidates?"

"Rob Smitherman" was my favourite answer but "Carroll something" comes close. (Shelley Carroll, Toronto's outgoing budget chief is not running for mayor.)

Toronto's voter turnout stands at about 40 per cent.

7. Rocco Rossi is being much friendlier to the popular guy in town. "Just like Rob Ford said..." was how he started one sentence. I knew I wasn't imagining things when he told George Smitherman to "cut Ford some slack."

8. Pantalone won't stop comparing Toronto to a "beautiful garden" that has to be treated with care and not by a reckless gardener who will pull out the flowers along with the weeds. He used this metaphor about four times.

9. Ford repeatedly asked Thomson if she was going to jump ship and throw her support behind Smitherman after the two were seen whispering at the table. "He was complimenting my scarf," she explained.

10. Rossi's pointed wit and sense of humour deserves a mention. He attacked Pantalone for being part of a council that is "responsible" for putting Ford in the lead with 46 per cent voter support.

"This guy is your political baby," he said. "He's sitting there because of your government."

Sandie Benitah is a Toronto journalist who has covered municipal politics for the CTV Toronto website and other publications. She is covering the issues of this election for CTV Toronto and CP24's websites.