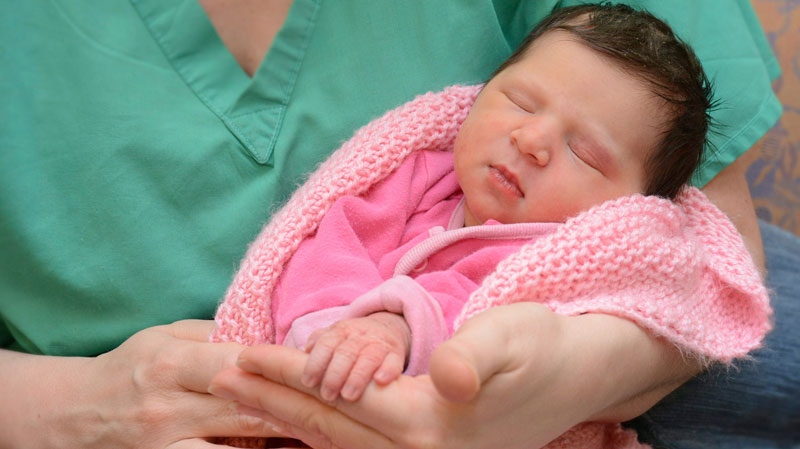 A nurse is shown holding newborn baby in this April 2013 file photo.

TORONTO -- When tallying up the province's tiny tots, Sophia and Jackson -- spelled in a variety of different ways -- turned out to be the most popular baby names in Ontario.

The names beat out previous top choices Olivia and Liam when different spellings of a name were combined and treated as one entry.

It's the first time the province has calculated the popularity of baby names in such a way, in an effort to reflect the impact of non-traditional spellings.

"It really changes the list," said Anne-Marie Flanagan, a spokeswoman with the Ministry of Government and Consumer Services. "It's a way to show this new trend of parents going with different spellings."

The government has also put out a traditional top names list -- that ranks each name based on its exact spelling -- which has Olivia and Liam remaining the most common choices in the province for the fourth year in a row, Flanagan said.

Different cities had their own top choices -- in Toronto, Emma and Daniel ranked first, in Ottawa it was Olivia and Benjamin, while in Thunder Bay, Emily and Jack were the most popular.

The baby name lists reflect data collected in 2014. After naming their baby, Ontario parents have up to one year to register their newborn's birth online.

Flanagan notes that pop culture appeared to have some influence on certain name choices, pointing out that various spellings of Arya -- the name of character on the popular television show "Game of Thrones" -- takes the number 10 slot in one of the province's lists.

"It's increased something like 25 per cent over the last 25 years," said Flanagan. "That one shows the pop culture influence more than any other name we've got here."